It is unfortunate that you failed in dealing with Chinese designs, he wrote 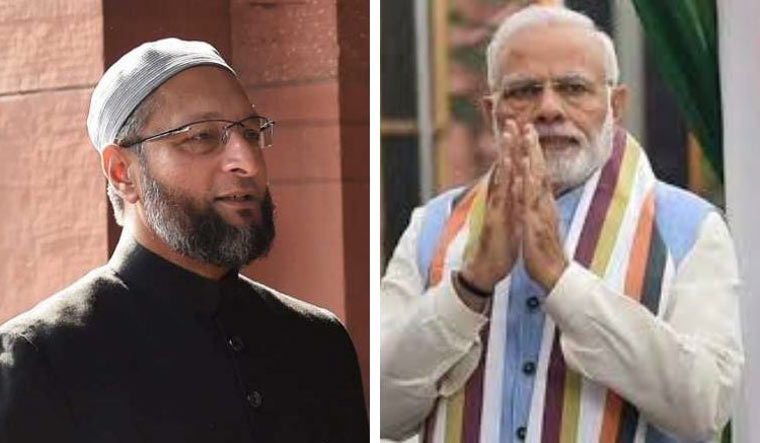 All India Majlis-e-Ittehadul Muslimeen (AIMIM) was not among the political parties invited to the all-party meeting convened by Prime Minister Narendra Modi on the situation along the Line of Actual Control (LAC).

Expressing disappointment over his party not invited to the meet, AIMIM chief and Lok Sabha MP Asaduddin Owaisi shot off a letter to the prime minister saying “he 'criteria' of the invitees betrays any rational explanation.” “At a time when national consensus and a unified response is essential, it is unfortunate that AIMIM was not invited to the meeting,” he wrote.

Noting that “it is absurd to limit the invitee-political parties only to those with over 5 Lok Sabha MPs, parties with Union Cabinet Ministers, and recognized national parties,” he said the “situation required the Government to include every political party with a Member of Parliament.”

Further, he demanded that the Parliament may be convened at the earliest “so that opposition parties may seek accountability from the ruling party.” He said the “government is bound to answer queries of representatives regarding occupation of Indian territory.”

Blaming the prime minister for the crisis that led to the death of jawans he wrote: “The crisis has precipitated for over a month, in which time, 20 soldiers have been killed by Chinese forces. The blame for this crisis lies solely with the political, strategic and military leadership headed by you. It is unfortunate that you failed in dealing with Chinese designs. The lives of those killed should not go in vain, and the best way to avenge their lives must be recovering Chinese-occupied Indian territory in Galwan Valley and Pangong So Lake areas by any means necessary."

"Furthermore, it is time that the Government of India share the facts with the rest of the country regarding the border situation. This is only possible when an independent review and inquiry is made by a Review Committee. Objective facts must be shared in the public domain regarding extent of Chinese incursions, extent of lapses in Indian decision-making and the consequent loss of Indian territory to Chinese occupation. It must be noted that a Kargil Review Committee chaired by Mr. K. Subrahmanyam was also established after the Kargil War.

Therefore, the government must appoint an independent review committee that may look into the sequence of events leading up to the loss of Indian lives and territory. The government must publish the Committee's findings in a Whitepaper and make it accessible to the public. Such Whitcpapers have been published by former Prime Ministers pertaining to the China border situation.”

“This Whitepaper must provide clarity on the following questions, especially in the period between May 2014 and June 2020:

1. How much Indian territory is under Chinese occupation since May 2014?

2. How many security personnel has India lost due to Chinese incursions or faceoffs?

3. What is the status of the territory at Naku La (Sikkim) where a faceoff was reported between Indian and Chinese forces on May 9?

4. How many times talks have been held between your government and the government of China since you took office?

5. What is the status and scope with negotiations with the Chinese?

6. How many incursions have been made into Indian territory by Chinese forces?

7. Who is responsible for the loss of lives of 20 Indian Army personnel in the recent faceoff?

8. If the Indian soldiers were reportedly armed in the recent standoff, why did they not open fire following the killing of their Commanding Officer by China?

9. What were the intelligence inputs about Chinese movements that were ignored by the government?

10. Has China communicated that India violated the bilateral border agreements by altering the constitutional status of Ladakh by making it a Union Territory and abrogating Article 370?

11. Why has the government not disclosed information regarding negotiations with China since the current government came to power in 2014?”

Wrote to @PMOIndia about the growing concerns regarding Chinese incursions into Indian territory. We’ve lost 20 brave personnel besides our territory to Chinese occupation.

Recovering this territory by any means necessary is the best way to avenge the killings of our men pic.twitter.com/8GlIMxZQ9l