COVID-19 pandemic may cause spike in child labour: CRY 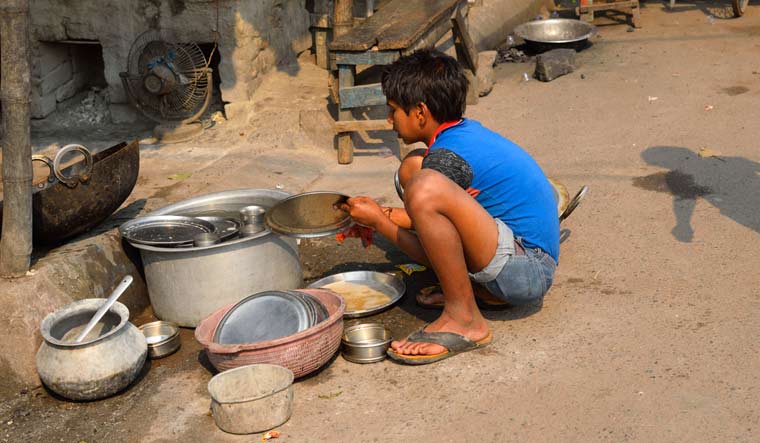 Fifteen-year-old Chintu Malgam (name changed) a resident of Dabar Tehsil in Ghoradongri town of Betul district went to Andhra Pradesh three months back. Two of his friends in the same age group from the neighbourhood also accompanied him.

According to Chintu, the financial condition of his family was extremely bad and he had to provide support to his family. So, he quit school and accompanied a local person, who already worked in AP, to work as a labourer on water bore drilling sites.

He had been working barely for a month, when the COVID-19 induced lockdown was announced. After waiting for about a month, Chintu and his friends decided to return, but they were paid due wages only earlier this month and returned home last week.

Chintu and his friends are among multitude of child labourers who normally remain out of the tracking ambit of state, but the lockdown has brought to light their plight clearly.

As of now, Chintu is not working. But the unprecedented humanitarian crisis caused by the COVID-19 pandemic that has already had a huge impact on economy, is likely to significantly increase the chances of steep rise in child labour being engaged in home-based enterprises, agriculture and in hazardous occupations, a technical analysis conducted by child rights group Child Rights and You (CRY) says.

The recent relaxations in labour laws, undertaken in view of the pandemic is further likely to precipitate the crisis in states like Madhya Pradesh, the analysis conducted with support of Tata Institute of Social Sciences says.

CRY has expressed the apprehensions on occasion of World Day against Child Labour on June 12.

The analysis says that states have made relaxations to their labour laws, including extending work hours form 8 hours to 12 hours per day, limited time for rest, relaxations in inspections and monitoring by authorities, restricted grievance redress mechanisms and collective bargaining through labour unions.

This will increase the possibility of many children and adolescents being forced to work for long hours, in hazardous and often abusive environments, for little or no pay, and often far from home, the CRY analysis says.

States like Madhya Pradesh are also more vulnerable because it is among the five states in the country with highest number of child labourers with total 7, 00,239 child labourers according to the 2011 Census. Of it, 4,13,929—that is more than half—are adolescents (15-18 years) while others are in the age group of 5-14 years. MP contributes 7 per cent of the child labourers in the country, while UP tops the list with 22 per cent, followed by Bihar at 11 per cent and Rajasthan 8 per cent.

Madhya Pradesh is also among top 3 states that have the highest number of interstate migrant workers—Gujarat (15.71 lakh), Madhya Pradesh (29.79 lakh) and Uttar Pradesh (1.23 crore), according to 2011 Census.

Regional director of CRY North Soha Moitra said, “COVID-19 pandemic and nationwide lockdown has already made the situation worse for migrant workers and has made children more vulnerable to child labour. Amid financial insecurity and loss of work among marginalised families; children are going to be the priority for employers seeking cheap labour. This can further lead to massive school dropouts, especially among adolescents. It is imperative that state governments as well as civil societies, especially in states like Madhya Pradesh, should contribute to stringent enforcement of child labour law.”

In a consultation held on the eve of World Day against Child Labour by CRY, Protiva Kundu, additional coordinator-research, Centre for Budget and Governance Accountability (CBGA), said, “COVID-19 crisis will definitely lead to surge in child labour. Government should expand the coverage of National Child Labour Project (NCLP) scheme in all districts, which is currently operating in 323 districts and spend on survey of identifying child labour. Also, it is high time to address dropouts in schools and government should expand Right to Education Act up to class XII.”