Students allege that the university has not acknowledged their various concerns 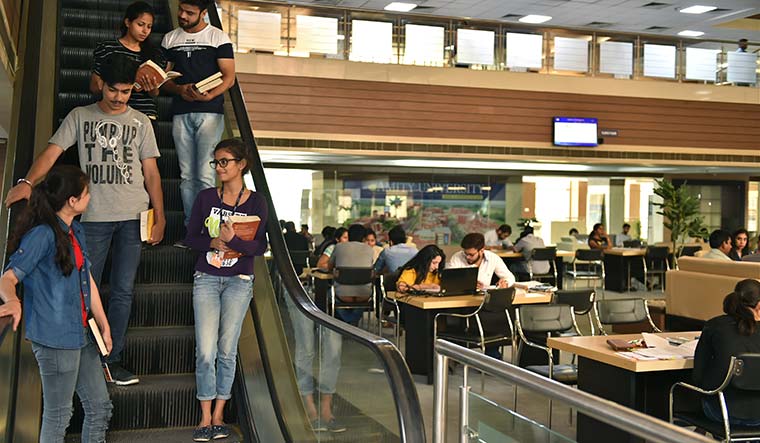 The proposed examination for final-year students of Amity University has caused a roar of online protests. Students allege that the university has not acknowledged their concerns, while the authorities believe that students must choose the time and mode of exam bearing in mind how the choice would impact their future.

Sunil Dhaneshwar, the pro VC of the university’s Lucknow campus told THE WEEK, “The university is aware of its responsibilities. The fears of the students are unfounded.” Queries to the university’s head office in NOIDA were not answered.

Students across the 11 campuses of the university argue that the management has shown no consideration for students who are in areas of low or patchy internet connectivity.

Data from the Cellular Operators Association of India (COAI) shows that only three of 10 internet users have access to high-speed broadband connectivity. Hence, it is safe to assume that many of the one lakh students that the university claims to have on its rolls, rely on much slower internet connections tethered to mobiles. As work from home around the country has increased, so has the load on such networks, making these not the best option for a time-bound examination.

Other students that THE WEEK spoke to said they had been stranded without their laptops, and when they flagged this to their respective department heads, they were told to ‘order from Amazon’. This directive assumes that buying a new laptop shall be possible by a student, while disregarding red zones/containment areas, which are not open to deliveries. It also does not bother about students in Jammu and Kashmir where internet services remain suspended. Or Kolkata that is still facing power outages and ruptured networks caused by Cyclone Amphan.

The university’s directives about the exams say, “You must be having a laptop and good internet connectivity for appearing in the online examination of final semester and back papers of previous semesters.”

The decision to conduct the exams was taken on the basis of a survey sent out to students on May 22. The online examinations, as the survey explained were, "to help you to move with your career plan without delay."

Though the survey appears to be geared to determining student choices through the offer of an online examination now or one (offline or online) later, it actually gives no choice to the students as the university has absolved itself of the consequences of late declaration of results. In contrast, the online exams come with guaranteed declaration of results in 15 days.

The university survey says, "…if you are not in a position to appear in the forthcoming end semester examination online due to technical issues or other unavoidable personal reasons, then you can say no also… For all the students who do not wish to appear in the examinations now, a chance will be given to reappear in special supplementary examination (offline/online as per the situations that time). The university in that case shall not be responsible for late declaration of results."

The survey pre-empted the act of not responding by assuming that such an act would be taken to be "a yes" for the online examination.

Though examination dates have yet not been announced, the survey said they would be conducted "from around June 10 onwards." Coincidentally, in the academic calendar suggested by the University Grants Commission (UGC), the summer break is to be between June 16 and 30, while final exams are between July 1-15.

The faculty, too, is concerned about these examinations. “Two rounds of meetings have been held between senior faculty and management, but we do not know if any of our concerns have been addressed. All we have been told is that there is some outside agency that will be contracted for the exam--but we do not know what this agency is or how it will maintain the sanctity and security of the exam," one senior faculty member said.

Another faculty member said that as all other universities, Amity too, was stuck when it came to working out a formula for final-year students. “No student wants to delay applying for further studies. But then, the online exam mechanism is not fool-proof. As the university has not given any assurance for a time-bound declaration of result for later exams, the students do not seem to have much of a choice. Just saying--have faith in the university is no guarantee."

Students tried wresting some control over the examination process by floating an online petition, which was quickly taken off on the university’s directive. “My friend was threatened by the university and his parents have forbidden him to speak about the matter," said a final-year student from the university.

In addition to the obvious fears that come with giving a final-year exam online, students are concerned about slow typing speeds, the challenge of tackling subjects such as graphic design that have little written components and answering papers that make substantial use of diagrams and flowcharts. While an ‘outsourced platform’ will test core, allied and elective subjects, the university’s own intranet--Amizone will be used for testing value-added courses through Multiple Choice Questions (MCQs).

Students told THE WEEK that though the online classes delivered through Amizone had been glitch-free, they had experienced it crashing during times of high use (such as registrations) in the past.

A crash of machine, server, systems or confidence could smash the aspirations of many final-year students--a prospect that they continue to dread, even though examination dates have not been announced.