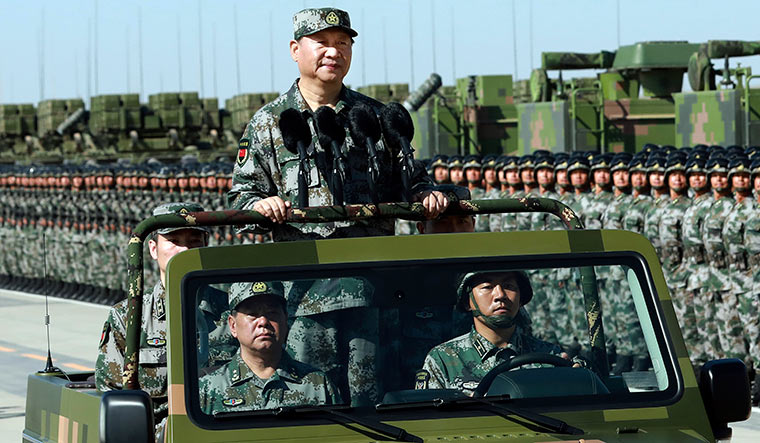 The Chinese army recently penetrated 3-4 kilometres into Indian territory in the Galwan area of Ladakh. Many people in India may think this incident was only due to some small misunderstanding about the border between the two countries, but that is not so. The incident is part of a much larger imperialist design of the Chinese, so let me explain.

Similarly, today, the danger to the world is not from the US, but from China, because the Chinese are on the road to aggressive expansionism in the world. With their massive industry seeking markets for its goods, and with their huge 3.2 trillion dollar foreign exchange reserves hungrily seeking avenues for profitable investment, the Chinese are today aggressive imperialists and the greatest danger to the world. It is true they are not presently expanding militarily like Nazi Germany, but they are aggressively expanding economically by penetrating and undermining the economies of many countries of the world.

In the last decade, Chinese overseas investment has skyrocketed. Today, the Chinese are almost everywhere: Asia, Africa, Latin America, and, of course, US and Europe. Their Belt and Road Initiative is a network of roads, railways, oil pipelines, power grids, ports and other infrastructure projects connecting China with the world. It aims at improving infrastructure and connectivity between China and the rest of Eurasia in order to dominate it. China's focus is often on vital infrastructure like ports—for example, Gwadar in Pakistan, Piraeus in Greece and Hambantota in Sri Lanka—with the aim being to get a strategic foothold in these countries.

By selling goods at less than half the price at which the US or European manufacturers can afford to sell (in view of their higher labour cost), the Chinese have destroyed many US and European industries. Now, the Chinese are seeking to capture the markets and raw materials in underdeveloped countries by dumping goods at very low prices, so as to make the local product uncompetitive. Pakistan, for instance, is flooded with cheap Chinese goods.

While capturing foreign markets, the Chinese were carefully protecting their own by high tariffs. It has to be said to the credit of US President Donald Trump that he has called the Chinese bluff, and bluntly told the Chinese that this won't do. “You can't have 25 per cent tariff on import of automobiles into China when US imposes a tariff of only 2.5 per cent for import of cars into US.” Trump has imposed tariffs on several Chinese goods and has announced more in the future. To this, the Chinese announced retaliatory tariffs, but that will hurt the US little.

It is well known that the Chinese establishment has no business ethics, and that is why many American and European companies are reluctant to hire Chinese from mainland China as they often commit espionage of industrial secrets.

Now, I would like to refer to China's economic relations with India.

As is well known, India was a British colony till 1947, and the British policy was broadly to keep India unindustrialised. However, after independence, a certain degree of industrialisation took place in India and we started manufacturing goods that we had to earlier import.

Now, the Chinese have, to a certain extent, penetrated our market at the expense of our domestic industries. An article, How Chinese companies are beating India in its own backyard, published in The Economic Times in December 2017 gives some interesting details. Indo-Chinese trade is heavily skewed in favour of the Chinese. Indian exports to China are valued at $16 billion, mainly of raw materials. But its imports from China are worth $68 billion, mainly of value-added goods like mobile phones, plastics, electrical goods and machinery and its parts. This is typical of the relationship between a colony and an imperialist country.

Chinese companies use aggressive pricing, state subsidies, protectionist policies and cheap financing. In certain sectors, Chinese companies dominate the Indian market; for example, in the telecom sector, 51 per cent share has been captured by Chinese companies. Indian homes are full of Chinese goods, such as fittings, lampshades and tube-lights.

To conclude, I appeal to the Indian government and others to consider seriously what I have said, and to start opposing Chinese imperialism. To ignore this danger will be behaving like an ostrich, like Neville Chamberlain who kept thinking Hitler was no danger until it was almost too late. Apart from opposing the aggressive Chinese moves at the border, the Indian government should expel all Chinese companies from India and ban entry of Chinese goods into the Indian market.

The Indian government should not do any appeasement of the Chinese as Neville Chamberlain did towards Hitler, but boldly confront them like Winston Churchill. Appeasement only whets the appetite of the aggressor.