If it develops into a cyclone, it will be called Cyclone Nisarga 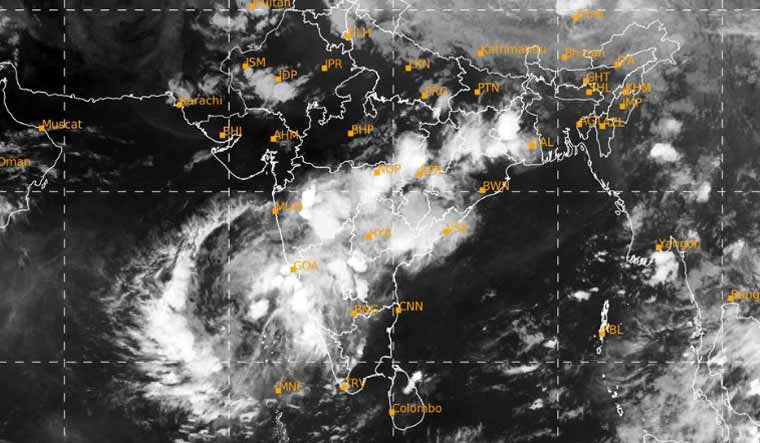 Fishermen who have ventured into the Arabian Sea along the north and south Gujarat coasts have been advised to return by Sunday and not go out till June 4.

"A low pressure is currently over east-central Arabian Sea and the Lakshadweep Islands. It is likely to intensify into a depression in the next 12 hours and a cyclonic circulation in the next 24 hours," the Cyclone Warning Division of the IMD said.

A low-pressure area is the first stage of any cyclone.

"It is very likely to move nearly northwards initially till June 2 and then recurve north-northeastwards and reach near north Maharashtra and south Gujarat coasts around June 3," it added.

The system will bring strong winds and heavy to very heavy rainfall to coastal Maharashtra and Gujarat.

For June 3, a red-coloured coded warning has been issued to coastal Maharashtra and Goa and an orange coloured warning to Gujarat.

The red-coloured warning has been issued to coastal Maharashtra, Goa and entire Gujarat for June 4, Sathi Devi, the head of the National Weather Forecasting Centre, said.

"An intense rainfall activity is expected due to the weather system," Devi added.

The IMD has four colour-coded warnings as per the intensity of any weather system -- green, yellow, orange and the last one being red.

The Ahmedabad meteorological centre of IMD also advised hoisting of "distant cautionary (DC)-1" storm warning signals at all ports on north and south Gujarat coasts, as the sea condition was very likely to be "rough to very rough," with wind speed reaching 90-100 kilometre per hour gusting to 110 kilometres per hour by June 4.

On June 2, wind speed is likely to reach 40-50 kilometre per hour gusting to 60 kilometres per hour over south Gujarat coast, with sea conditions very likely to be "rough to very rough".

On June 3-4, squally wind speed is likely to reach 90-100 kilometre per hour gusting 110 kilometres per hour over Gujarat coasts, and the sea condition is very likely to be high to very high, it said.

Fishermen are also advised not to venture into west-central Arabian sea along and off south Oman and Yemen coasts during the next 24 hours due to depression over south coastal Oman and adjoining Yemen, the IMD said.