'When pandemic ends, Modi will have global stature no Indian leader had' 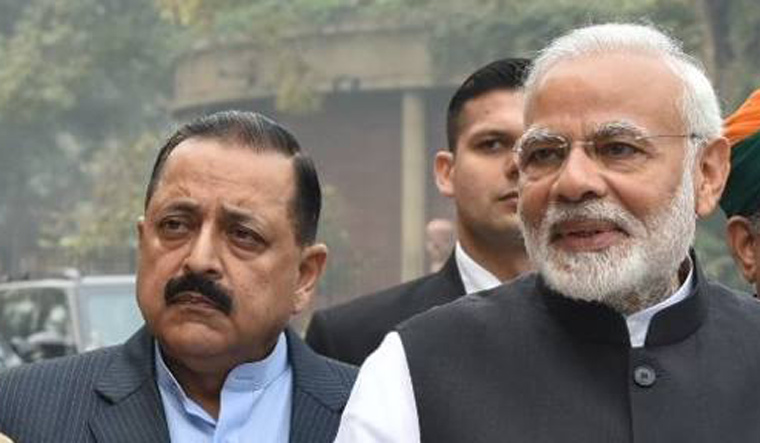 Union Minister Jitendra Singh on Friday said when the COVID-19 pandemic will be over, Prime Minister Narendra Modi will emerge as a world leader of a stature that no one else from India had been able to achieve in the post-independence era.

Jitendra Singh, the Union minister for the Prime Minister’s Office, also said the post-COVID-19 era will present India an opportunity to take the lead over the rest of the world and raise its economic status, based on self-sufficiency.

Hailing Modi's "visionary steps" in combating COVID-19 challenges, the minister said compared with other countries, India has been successfully fighting against the disease due to several out-of-the-box decisions taken by the prime minister in the last six years.

"In the aftermath of the COVID-19 pandemic, Prime Minister Narendra Modi will emerge as a world leader of a stature that none else from India had been able to achieve in the post-independence era," Jitendra Singh told reporters in New Delhi.

The Union minister also referred to the Swachhta campaign initiated by Modi within a few months of taking over as prime minister in 2014 and the ongoing efforts against the coronavirus.

Similarly, it was Prime Minister Modi who decided to set up a separate AYUSH ministry, which is now exporting its drugs to several countries in the wake of the COVID-19 pandemic.

Referring to Jammu and Kashmir, Singh dared the opposition Congress to publicly declare that it will restore Article 370, which gave special status to the erstwhile state, if ever it comes back to power.

Jitendra Singh, who hails from Jammu and Kashmir, said the Congress party and its allies, particularly the Jammu-based leaders of National Conference and PDP, often criticise the Modi government's decision, but none of them has the courage to openly say that they are against the decision to abrogate Article 370.

“Such leaders are well aware that if they say anything against this decision, they will instantly invite public displeasure and face electoral losses in the next polls,” Jitendra Singh argued.

These are the same leaders, Jitendra Singh recalled, who just a day before August 5, 2019, when the Centre had announced the abrogation of Article 370, said that nobody can dare to revoke the special status of Jammu and Kashmir and if that ever happens, "there will be earthquake, bloodshed etc".

"But immediately after the revocation of Article 370, they felt silent and instead started raising collateral issues like, for example, the conversion of state into Union territory, which according to them was a degradation and so on. They have all along evaded the basic question, whether they support the abrogation of Article 370 or not, and if not, will they make it an election issue and tell the public openly that they will fight the election on the promise of restoring back Article 370 if they came to power," he said.

On the issue of the Citizenship (Amendment) Act (CAA), the BJP leader said nobody directly raised the basic question whether they support the logic of having the legislation or not, which is available in many other countries.

"Instead, the opposition tried to manufacture imaginary issues like production of documents in spite of repeated rejoinders by Union Home Minister Amit Shah. The result was that the misguided campaign was destined to fizzle out," he added.