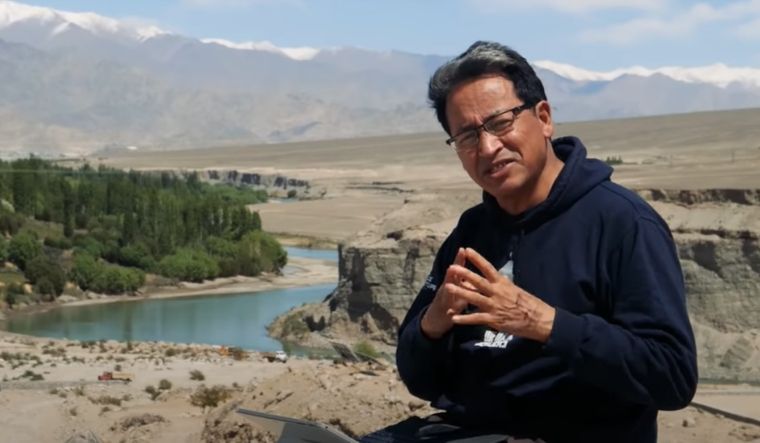 A scrrengrab from the video released by Sonam Wangchuk

Sonam Wangchuk, who inspired Aamir Khan's character in the name in the movie 3 Idiots, has urged Indians to boycott "Made in China" products in response to Chinese aggression at the border in Ladakh over the past few weeks. "Give up all Chinese software in a week, all Chinese hardware in a year," Wangchuk says in a recent video.

"Use your wallet power. #BoycottMadeInChina #SoftwareInAWeekHardwareInAYear to stop Chinese bullying in Ladakh and eventually to liberate the 1.4 billion bonded labourers in China, as also the 10 million Uighur Muslims and 6 million Tibetan Buddhists," Wangchuk said in a tweet accompanying the video. In the video, Wangchuk can be seen sitting against the picturesque views of the Himalayas and river Sindhu, explaining how just beyond the mountains, thousands of soldiers are trying to protect the country.

The innovator said he was giving up his Chinese-made phone within a week, and went on to explain why.

In an appeal urging the countrymen to even uninstall Chinese apps, the educator said: "On one hand, our soldiers are fighting them and on the other hand, we buy Chinese hardware and use software like the TikTok app, we give them business worth crores so they can arm their soldiers to fight against us," he said.

Sonam Wangchuk's video, set in Ladakh with the Himalayas and river Sindhu in the backdrop, has been widely shared on social media. "What is your responsibility as a citizen, in this India-China border tension," asks the 53-year-old inventor, talking about fighter jets flying overhead not far from where he sat.

"I am getting rid of my phone, which is made in China, within one week and in one year, anything that is made in china, I will throw out of my life," he shared, urging each citizen to spread the message to 100 others.

USE YOUR WALLET POWER#BoycottMadeInChina #SoftwareInAWeekHardwareInAYear to stop Chinese bullying in Ladakh & eventually to liberate the 1.4 Bn bonded labourers in China, as also the 10 Mn Uighur Muslims & 6 Mn Tibetan Buddhists.
Click this link to playhttps://t.co/ICjRQJ2Umf pic.twitter.com/lpzAXxARPj

In the video, he majorly speaks about the responsibilities of the Indian citizens and how they can help India during the tension between the two countries. "Tension is rising... thousands of soldiers are being deployed. Normally, when there is border tension, we sleep at night thinking soldiers will respond to it. But today I want to say, there should be a citizen response, too. Citizens like you in Delhi, Mumbai and Bengaluru."

Wangchuk says, it is not just about the phones and the computers, it is also applicable to the softwares and apps such as TikTok that need to be boycotted. As a result, India will become self-reliant and things that are made in India will flourish.