The locust swarms spreading across India have reached Bhandara, not Mumbai 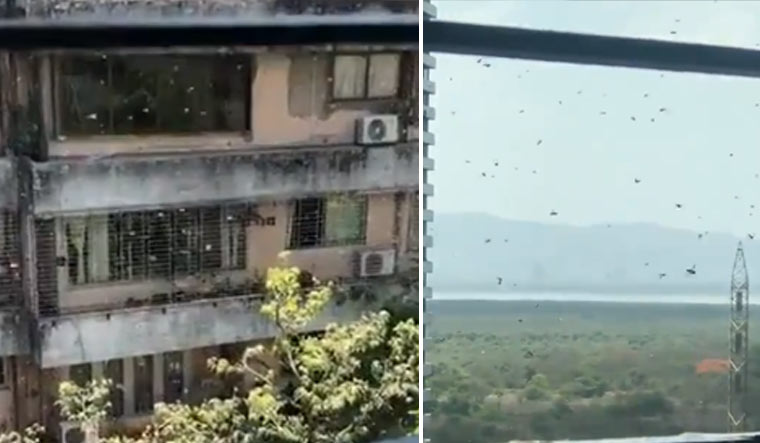 Screenshots of videos shared on Twitter purporting to show locusts swarming around the city of Mumbai. Claims of a locust swarm over the city were later revealed to be fake | Twitter

Videos of 'locust swarms' in Mumbai went viral on social media on Thursday, prompting authorities to clarify that no such activity took place here.

The videos claimed swarms of locusts flying over northern India had entered Mumbai, which is already battling the coronavirus pandemic that has led to 35,273 COVID-19 cases and 1135 deaths in the city.

One such video shot from a building showed a 'locust swarm' with a skyline that appeared to be of Mumbai.

"The locusts have landed! Welcome to Mumbai, locustji. Feel free to mingle with our political pests...," columnist Shobhaa De tweeted.

Actress Neeetu Chandra informed in a tweet that her aunt staying in Colaba area had sent her a video of a swarm of locusts in the south Mumbai area.

Others on social media asked people not to take an alarmist approach of the arrival of locusts in the city.

"My sister says Locust travel to Mumbai every year around end of May. They attack our plants in the terrace and ruin them. She is saying we are very used to it," one user said.

Maharashtra state disaster management officials said no locust swarm was spotted in Mumbai. "The viral images and videos have been wrongly attributed as being from Mumbai," an official said.

The locust swarms came to Vidarbha region from Madhya Pradesh, said D. B. Undirwade, head of the department of entomology of Panjabrao Deshmukh Agricultural University in Akola.

"I have seen a locust swarm in the state for the first time in last 20 years. I recall people saying that in 1993, a similar locust attack was reported in the state," he told PTI.

The state agriculture department on Thursday claimed that 66,000 farmers were alerted and asked to report if they saw a locust attack.

"Our SMS alerts helped the ministry as we got calls from farmers in various villages and could trace the locust swarms. We have been spraying chemicals (on crops) for the last three days and have succeeded in putting a check on the locust attack, a senior official said.

"We have noticed that the locust swarms have moved towards Gondia and may enter Chhattisgarh. We are keeping an eye on their movement, he said.

The insects have destroyed crops on thousands of hectares of farmland in the country's worst locust crisis in three decades.

The locust swarm that entered Maharashtra earlier this week made its way to Bhandara on Wednesday, making it the fourth district in the state to be affected.

The swarm had invaded farmlands and fruit orchards across two talukas in Amravati, one in Wardha, and four in Nagpur till Wednesday.

The state agriculture department had issued a locust warning alert for all 11 districts in Vidarbha and four districts in north Maharashtra  Nandurbar, Dhule, Nashik and Jalgaon to keep a lookout for locusts near farmlands, take preventive measures, and inform state authorities, an official said.