General Naravane’s comment was aimed at China, which has been provoking Kathmandu 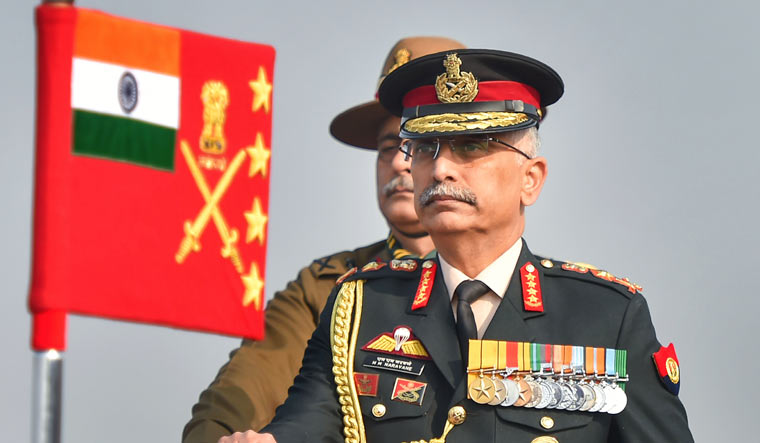 Indian Army Chief General M.M. Naravane suspects that the objection expressed by the Nepalese government to India's construction of a strategic link road in Uttarakhand on the border with China could have been done at the "behest of someone else". The Army chief's comment was aimed at China, which has been provoking Kathmandu to raise the issue with India

In a carefully worded statement (without naming China), the Indian Army chief said, “I do not see any contradiction at all. The Nepal ambassador has said area east of the river (Kalapani) is theirs. And the road is west of it. So I don’t know what they (Nepalese government) are agitating about."

"There are issues of where the tri-junction should be. They [Nepal] may have raised the issue at the behest of someone else," the Indian Army chief said while speaking at a webinar organised by The Manohar Parrikar Institute of Defence Studies and Analyses (IDSA), a think tank under the ministry of defence.

Last week, Defence Minister Rajnath Singh inaugurated the 80km road to facilitate pilgrims visiting Kailash-Mansarovar in Tibet in China, which is around 90km from the Lipulekh pass. Lipulekh is a strip of land on the northwestern edge of Nepal, lodged between Nepal, India and Tibet and is a far western point near Kalapani, a disputed border area between Nepal and India.

Both India and Nepal claim Kalapani as an integral part of their territory—India as part of Uttarakhand’s Pithoragarh district and Nepal as part of Dharchula district.

The road construction in Uttarakhand has its strategic value as it will be the first road that provides connectivity to the Indian troops deployed on the Line of Actual Control with China in Uttarakhand. Built by the Border Roads Organisation, the road originates from Ghatiabgarh and terminates at Lipulekh Pass, the gateway to Kailash-Mansarovar. Approved in 2005 by the Cabinet Committee on Security at cost of Rs. 80.76 crore, the strategic 80km road between Ghatiabgarh and Lipulekh was made under the directions of the China Study Group, an inter-ministerial strategic group.

The Army chief's statement came amidst recent incidents of face-offs between Indian and Chinese People Liberation Army (PLA) troops on the border. However, he denied any relation between Nepalese objection to the India's border road and face-offs of troops.

"I do not see any relation. Many times, it also happens when there is a change of commander on the ground who wants to show he is a little different," General Naravane added.

The Army chief added that presently the Indian Army is facing "two-and-half-and-half" front situation. Besides two fronts of India and China, he said the Army's counter-terrorism actions and now its war against COVID-19 pandemic is an additional front to deal with.

“Due to stringent norms, no single case of COVID-19 has been reported in any of our operational commands on northern and eastern command," General Naravane said, adding that the Army operates in isolation, which is an advantage. "But we have disadvantage also. Our force cannot follow social distancing norms while maintaining the operational needs," he further said.

The Army chief also talked about budgetary cuts due to the COVID-19 pandemic, as the ministry of defence has already ordered cuts by at least 20 per cent from the allocations for the financial year 2020-21.

"No doubt, there will be some budgetary constraints. We have identified a few areas where we can defer or re-prioritise to next year. One area is the number of Army movements. Normally, there are 250-300 moves per year. And each move costs in the range of Rs. 1 crore," the Army chief said, adding that "Movement in high-altitude and counter-terrorism areas has to continue. But some peace movements can be avoided. We have identified 100 such moves that can be deferred." He added for major military exercises, troops formations move to Rajasthan. That can be avoided for a year without affecting the operational performance.

"Whatever cuts are there (budgetary constraints), I can assure that they will not be at the cost of operations efficiency and preparedness," the Army chief clarified.

Due to the COVID-19 pandemic, the Indian Army's introduction of Integrated Battle Groups (IBG)—comprising a mix of infantry, artillery, air defence, tanks and logistics units, as part of a far-reaching revamp of its war-fighting capability, particularly along the borders with China and Pakistan—has been put on hold.