Amid lockdown, here is a heartwarming lost-and-found story 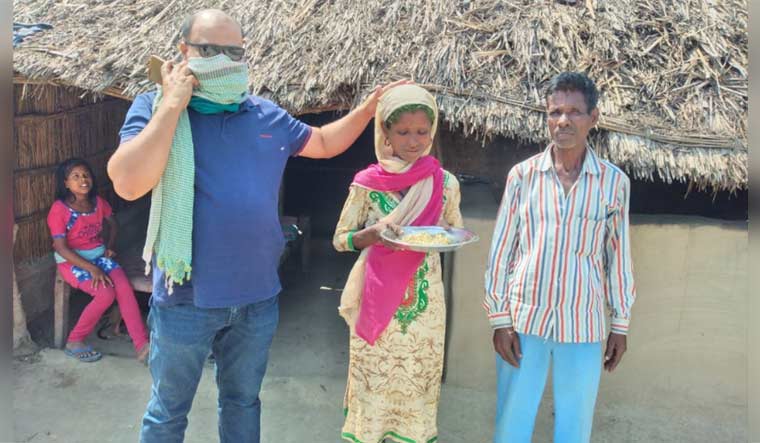 A six-month search for a missing daughter came to a happy end when the woman in question was discovered during a drive to help people in need during the lockdown.

Maksood Ali, a 42-year-old farmer and social worker was driving around distributing rations in his home district of Lakhimpur Kheri on Friday. The district is a green zone and Ali had ventured some 50 kilometres from his home in Bodhiya Kalan village of Nighasan block to look for the poor and destitute.

“I had just crossed a culvert on the Sharda Canal when I spotted a dishevelled looking woman standing by it”, says Ali. A couple of quick inquiries around the area revealed that she had been staying by the canal for many weeks and was often seen begging for food.

Ali ventured closer to her to offer some food, which she refused. “It then struck me that she looked familiar. Her hair was coloured, she was painfully thin—but looked so much like a woman who had gone missing from her in-laws place six months ago. She did not recognise me”, he says.

That woman in question was Jai Devi—a resident of the hamlet of Kodi Baba near Ali’s farm.  Ten years ago, she had been married to a man called Swami Dayal in the village of Madhaiyan (Bijuwa block of Lakhimpur Kheri). A mother to two sons—now nine and five—one night she went missing.

Her husband and in-laws said that she had walked off into the night—and that she had been of unsound mind. Neighbours of her in-law’s whispered that her husband had abandoned her under the pretext of a doctor’s visit. But, Jai Devi’s family, of limited means and with no education, could not prove the abandonment. Ali had then helped draft an application for the local police station at Bhira. Nothing came of it—not unusual in a state that, in 2017-18, accounted for more than half the complaints received by the National Commission for Women, for various crimes including domestic abuse and dowry demands.

Last evening, as Ali stood in front of the woman, bathed in relief and surprise, he was unsure that she was the same person he had been looking for. The picture in his mind had dimmed. He was also fearful of acting in a manner that might be deemed unlawful or inappropriate later. So he took some photographs of her—sent it to a farm help at his home and asked for them to be shown to the woman’s father to confirm. While the confirmation came, and in the duration that it took to organise a vehicle for Jai Devi’s family to come and pick her up—Ali remained stationed in his car, keeping a close watch on her.

Jai Devi’s father Kanta Prasad is an agricultural labourer. His daughter, now 32, is the eldest of eight siblings—all without a formal education. Four of her siblings are brothers who work as daily wagers in the sugarcane fields of Meerut. Since the lockdown, they have been unable to return.

Kanta Prasad says, “My daughter was completely well when I [had her] married. Her husband would frequently beat her up and she lost her mind. Some years ago he abandoned her to go to Mathura to join a cult. I got her treated and he came back to take her. She once told me he would pull her hair and throw her repeatedly. It is difficult to make out what she is speaking now. Her mind is completely out of control. But I am sure she wants to have nothing to do with the man”.

The Census of India, 2011, puts the number of abandoned or separated women in India at 2.3 million. Most go without receiving any monetary or emotional support.

Mohammed Haider, a lawyer from Bodhiya Kalan—who practises at Lucknow and often takes up such cases, as part of what he calls his ‘individual social responsibility’ says that the first concern is Jai Devi’s mental well-being.

“We will then file a police report against the husband and in-laws under the Dowry Prohibition laws, relevant sections of the Indian Penal Code and the Domestic Violence Act. We will also seek monthly compensation for her maintenance subject to her husband's income status”, he says.

But for now, Jai Devi—lovingly bathed and dressed in borrowed clothes by her family and examined by a doctor—is a happy woman. She does not speak to strangers but a shy smile on her lowered face says it all.