What is Styrene, the poisonous gas that killed eight in Visakhapatnam?

It can wreak havoc with the nervous system 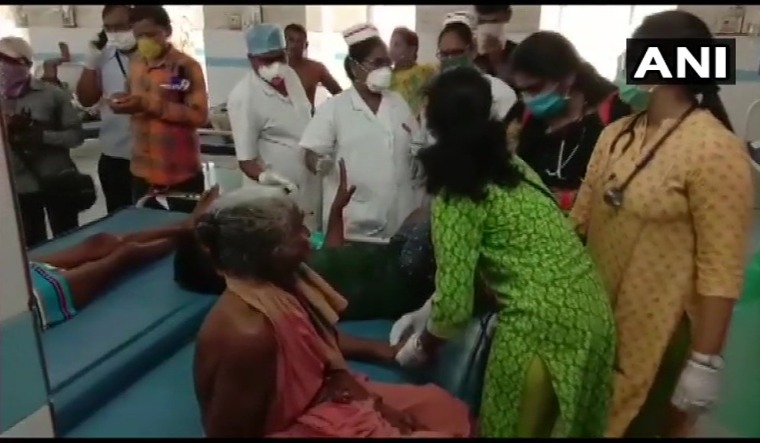 A major leak from a polymer plant in Andhra Pradesh's Visakhapatnam impacted villages in a five kilometre radius, leaving eight people dead and scores of citizens suffering from breathlessness and other problems in an early morning mishap that raised fears of a serious industrial disaster. Prime Minister Narendra Modi, who took stock of the situation, and Home Minister Amit Shah expressed concern over the incident.

"Spoke to officials of MHA and NDMA regarding the situation in Visakhapatnam, which is being monitored closely. I pray for everyones safety and well-being in Visakhapatnam," Modi said in a tweet.

The dead included a child, while scores of policemen who rushed to evacuate affected persons also were impacted by the leak of Styrene vapour from the LG Polymers Limited plant at RR Venkatapuram village under Gopalapatnam limits in the wee hours of Thursday. Tragically, two of the victims met with their end after falling into a borewell while fleeing their affected village, and their bodies were found later in the day.

Hindustan Times reported NDRF Director General S.N. Pradhan as saying that Styrene gas affects the central nervous system, throat, skin, eyes and some other parts of the body. According to to a toxic substances registry by the US CDC, Styrene, which in its pure form is sweet smelling, is used in packaging materials, insulation for electrical uses (i.e., wiring and appliances), insulation for homes and other buildings, fiberglass, plastic pipes, automobile parts, drinking cups and other "food-use" items and carpet backing.

According to the US agency, Styrene breaks down in air in two days and is present in industries using or manufacturing styrene, automobile exhaust, cigarette smoke, and photocopiers. Studies have claimed it is a possible carcinogen. "The Department of Health and Human Services (DHHS), National Toxicology Program (NTP) listed Styrene as "reasonably anticipated to be a human carcinogen" in the Report on Carcinogens, Twelfth Edition, released on June 10, 2011. The International Agency for Research on Cancer (IARC) has determined that Styrene is a possible carcinogen," according to CDC.

Dr C.V. Rao, Director, GITAM Institute of Medical Sciences, told The Hindu: "Several epidemiological studies suggest there may be an association between Styrene exposure and an increased risk of leukemia and lymphoma. However, the evidence is inconclusive due to confounding factors.”.

What happened after the leak?

The daybreak saw some grim scenes as visibly suffering people were being rushed for medical assistance in autos and two-wheelers while government workers tried to assist them with whatever first aid possible. People lying on roadside and near ditches in unconscious state narrated the magnitude of the situation, as the government said arresting the leak was the first priority.

Reportedly, the vapour leak occurred in the early hours of Thursday when some workers of the plant were making preparations for the re-opening of the unit following easing of the ongoing lockdown restrictions. State Industries Minister Mekapati Goutham Reddy said the LG Polymers unit was supposed to reopen post-lockdown on Thursday. "We are trying to reach out to the top management of the [South Korean] company...our immediate priority is to arrest the leak and ensure proper medicare to the affected people," he said.

While hundreds of villagers, most of them children, suffered the consequences of the vapour leak like irritation in eyes, breathlessness, nausea and rashes, over 100 people were admitted to government and private hospitals. Visakhapatnam district Joint Collector Venugopal Reddy said people from RR Venkatapuram village have been fully evacuated and shifted to other places. Several police personnel, who came for the rescue operation, also suffered symptoms like breathlessness, irritation in eyes and fell unconscious.

The styrene vapour spread to nearby villages and left the unsuspecting people suffering while fast asleep. Teams of NDRF rushed to the spot and reports said the source of the gas leak was contained in the morning. Meanwhile, Amit Shah termed the gas leak as disturbing.