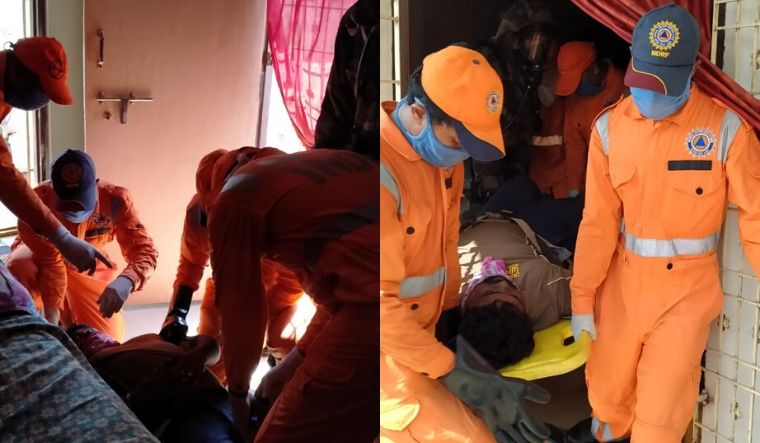 NDRF personnel in relief and rescue mission at Visakhapatnam

The National Disaster Response Force (NDRF) in Pune has decided to airlift a team of five experts specialising in handling  chemical, biological, nuclear and radiological disasters from its fifth battalion to Visakhapatnam, where a gas leak has claimed lives of 11 persons so far, left around two dozen critical and more than a thousand affected.

Villagers living within the 4-km radius of LG Polymers industry at R.R. Venkatapuram have been evacuated and the entire area is being sanitised by the disaster response forces. A police investigation has been launched to probe how the leak took place and determine the quantity of the gas leakage resulting in the chemical disaster.

The NDRF specialists are being flown in after Prime Minister Narendra Modi, chairman of the National Disaster Management Authority( NDMA)--the apex disaster management decision-making body in the country--asked the NDRF to pull in resources from across the country to manage the grave threat arising out of the leakage of the gas believed to be synthetic chemical styrene, which can cause acute respiratory disorders, brain damage and skin infections depending on the level of exposure.

The National Crisis Management Committee also met soon after and asked the central and state government disaster management authorities to rope in medical experts from New Delhi as well as experts in chemical management.

The NDMA has classified the gas leak as a chemical disaster that requires a multiple response system from chemical management, specialised medical assistance and evacuation facilities, besides rehabilitation and treatment.

An NDRF team was already present at the regional response centre at Visakhapatnam and swung into action around 5.30am Thursday morning after the local authorities informed them about the incident that had occured around 2.30am at night . The villagers first informed the local police and the civil administration and fire departments swung into action. Unable to control the situation, the NDRF was alerted. While the leakage has not stopped completely, a minimum quantity remains and the source of the leak is in the process of being plugged completely.

The NDRF, which has 12 battalions (13,200 personnel) and 50 sub-battalions in the country, is a specialised force equipped to provide a specialised response to chemical, biological, nuclear and radiological (CBRN) disasters.

In 2011, the NDRF had helped recover dead bodies from the radioactive material released by the meltdown of the three reactors at the Fukushima Nuclear Power Plant in Japan resulting in emissions and explosions. The triple disaster in Japan was triggered by the earthquake in Tohoku that led to another devastating tsunami followed by the meltdown. This was the first real test of the NDRF personnel trained in handling CBRN threats. The specialists led the global efforts inviting  appreciation not only by the Japanese government, but also by other countries.

However, the NDRF is hard pressed for manpower these days being deployed for covid duties at airports to assist state governments in different parts of the country in the management of the biological disaster.

Sources said the NDRF is also raising new battalions in the coming months, hinting that the expansion of the force is the need of the hour.

Meanwhile, the state police is probing how the gas leak took place and is expected to investigate whether the CBRN safety guidelines issued by the NDMA were flouted by LG Polymers industry at R.R. Venkatapuram .

The fact that the leak took place when the company was preparing to commence operations after a 40-day lockdown period, has also brought attention to opening up of factories and industries across the country.

NDMA member Kamal Kishore said all such establishments need to ensure that the CBRN rules and regulations are strictly followed to prevent such incidents in future. The home ministry is expected to ask all states to ensure the CBRN guidelines are being followed by all industrial establishments.

The gas leak has also brought back memories of the Bhopal Gas tragedy in 1984 as women and children were rushed to hospitals after the gas leak. The leak from the union carbide plant had left around 3,500 dead and many maimed even as their rehabilitation and treatment remained a struggle for years.  The government on Thursday tried to assuage the concerns about the relief and rehabilitation of the affected persons saying that the styrene gas effect stays for nearly seven hours in the air and spraying of water has neutralised the effect of the leaked gas.

The NDMA member also said the effect of the gas does not seem to have a long-term effect, but the impact will vary from people having acute or chronic exposure. The disaster management authorities are hoping that the effect of the gas in the atmosphere reduces significantly in the next few days and those who are critical and admitted in hospitals recover from the treatment being provided to them.

AIIMS director Randeep Guleria said there was no specific antidote for the chemical; however, supportive treatment can reduce the lethality with use of ventilators and oxygen therapy.