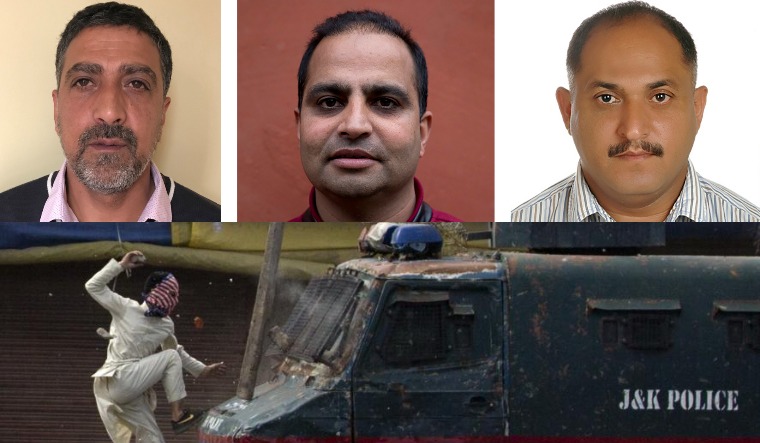 A collage showing on top Dar Yasin (left), Mukhtar Khan (centre) and Channi Anand; at bottom, a photograph from Yasin of a protester jumping over an armoured vehicle in Srinagar in May 2019 | Associated Press

Three photojournalists from Jammu and Kashmir have won the 2020 Pulitzer Prize in feature photography.

All three—Dar Yasin, Mukhtar Khan and Channi Anand—work for Associated Press in Jammu and Kashmir.

Yasin and Khan are residents of Srinagar in Kashmir while Anand lives in Jammu.

The three have been awarded the Pulitzer Prize for their exceptional coverage of Jammu and Kashmir, notably the lockdown that was imposed on Jammu and Kashmir by the BJP government at the Centre after the revocation of Article 370 on August 5, 2019.

Like most reporters and photojournalists, Yasin and Khan found it extremely difficult to send the images captured during the lockdown to the Associated Press due to the suspension of phones and the internet during the lockdown after the removal of Article 370.

They often found themselves in a precarious position while capturing images and happenings during the lockdown and had to often negotiate roadblocks and take cover in strangers’ homes. They also had to conceal their cameras while covering protests and security forces’ action.

Due to suspension of the phones and internet, the reporters and photojournalists working for national and international media had to think of out-of-the-box solutions to send their stories and photographs to their respective organisations. Yasin and Khan did just that.

They managed to reach the airport and convinced Kashmiri passengers to carry photos stored in drives and disks to Delhi and hand them over to the Associated Press staff.

The news of the Pulitzer Prize going to the three Associated Press photographers from Jammu and Kashmir brought cheer to Kashmir.

WhatsApp groups of journalists were filled with congratulatory messages since 3am on Tuesday when Kashmir woke up for Saher, a mandatory meal for those fasting in Ramzan.

Khan told THE WEEK he was very excited to hear the news.

“It is unbelievable that we have landed this prize,’’ Khan told THE WEEK. “I was not expecting that I and my colleagues would be selected for this prize.”

With over 20 years of experience, Khan has been with Associated Press for 19 years.

A resident of Fateh Kadal area of Srinagar, Khan is married and has two children.

Yasin told a Srinagar weekly he had been asked to watch the prize announcements.

“I just watched. I don’t know what to say right now,” he said.

Yasin has won dozens of international and national photo awards, in contests such as NPPA’s Best of Photojournalism, POYi and Atlanta Photojournalism Seminar. He received the Ramnath Goenka Excellence in Journalism Awards twice for the stories from Kashmir. Additionally, he’s been recognized by the National Headliner Awards, and by the Society of Professional Journalism with the Sigma Delta Chi Award.

Yasin was part of The Associated Press team that won the Hal Boyle Award for the Rohingya exodus from the Overseas Press Club and a Robert F. Kennedy Award in the Print-International category. He also won 2019 Yannis Behrakis International Photojournalism Award for his coverage of the Kashmir conflict.

Anand was unavailable for comment. However, he posted a WhatsApp update on the Pulitzer Prize win. "Thank you so much everyone for the congratulations and appreciation. it's been a long journey and KUDOS to those who stood by my side,” Anand wrote.