Since 2015, Ahangar has been actively involved in the activities of ISJK 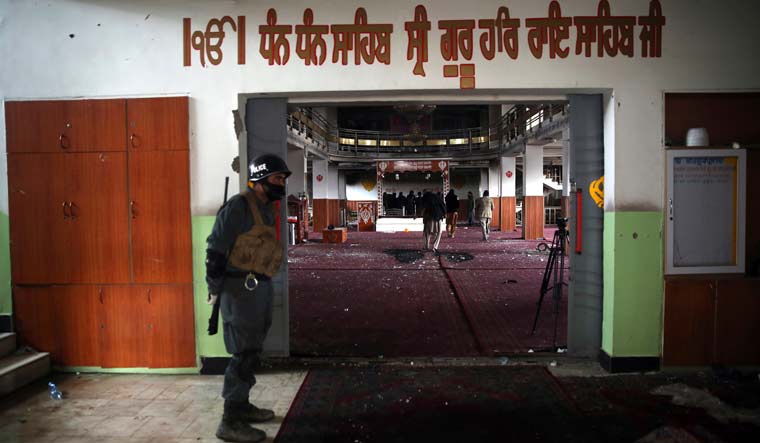 [File] An Afghan policeman stands guard at the entrance to a Gurdwara, as journalists film the aftermath of an attack in Kabul | AP

Pakistan spy agency ISI's multiple terror proxies running from Sialkot in Pakistan to Kashmir and making deep inroads in Afghanistan have been exposed, as identities of the other attackers of the dastardly Kabul Gurudwara attack last month have started getting established.

Fresh probe into the terror attack claimed by the Islamic State of Iraq and the Levant-Khorasan Province (ISKP) has thrown up links from Sialkot to Kashmir and family linkages across the border that forms the ISKP terror machinery supported by ISI. Along with the arrest of ISKP chief Mohammad Aslam Farooqi alias Amanullah last week, the Afghan security forces apprehended 20 other cadres and one among them was Ali Mohammed, who claimed to be from Islamabad.

Detailed probe into his background by counter-terror agencies has revealed that his real name is Aijaz Ahmad Ahangar alias Abu Usman Al Kashmiri, the chief recruiter of Islamic State of Jammu and Kashmir (ISJK). Ahangar, 55, is a resident of Nawa Kadal in Srinagar and is the son-in-law of Abdul Gani Dar alias Abdul Ghazali, former chief of Tehreek ul Mujahideen (TuM) and an LeT Commander.

Notably, Ahangar is also the father-in-law of Huzafa al Bakistani, a resident of Sialkot, an online recruiter of ISKP and later ISJK, who was killed in a US drone attack in Nangarhar in Afghanistan on July 18, 2019.

Counter-terror officials revealed that Ahangar was born in Budgam and was married to Ghazali's daughter Rukhsana alias Rukaiya alias Fathima. He was arrested by the security forces for his active involvement with the TuM and Al Badr and was later released from the Srinagar central jail in mid 1990s.

Intelligence reports claimed that Ahangar and Rukhsana clandestinely travelled to Pakistan in 1995 via Bangladesh and were settled in Islamabad by ISI, which further cemented his Pakistani identity by solemnising his marriage with PoK resident Aishay alias Saira in 2008.

It is learnt through intelligence reports that Aishay had two brothers, Abdul Wahid alias Zubair and Amir, both associated with Al Qaeda, with Abdul Wahid being the head of the unit of Miran Shah (south Waziristan).Counter terror officials revealed that in 2009, Ahangar, facilitated by ISI, left Islamabad for South Waziristan along with second wife Aishay. Subsequently, with the help of Aishay's brother, Rukhsana and her children joined him in 2010. It is in South Waziristan that he joined the ISIS and later ISKP in 2015 at the behest of the ISI.

Since then, Ahangar was actively involved in the activities of ISJK along with his son-in-law Huzafa al Bakistani. Sialkot-based Bakistani and Ahangar have deep links with the Lashkar-e-Taiba, said a counter-terror official, adding that this establishes the ISI's multiple terror proxies in the south-asian region.

Incidentally, Ahangar's father-in-law Ghazali was found murdered at a mosque in Mesuma in Srinagar on February 13 this year.

Investigations into the case revealed that he had been murdered by one Ghulam Moiudeen Dar, reportedly over a dispute over the distribution of terror funds being pumped into the Valley by the ISI.

The National Investigation Agency, which has registered its first case of a terror attack on foreign soil, is now waiting to get the nod from the Afghan forces to question Farooqi, where details of the Indian links and cross-border terror linkages of ISI's proxies like ISKP are likely to emerge.