The life of ASHA workers in the time of COVID-19

For ASHA workers, the pandemic has meant more hours of work and personal risk 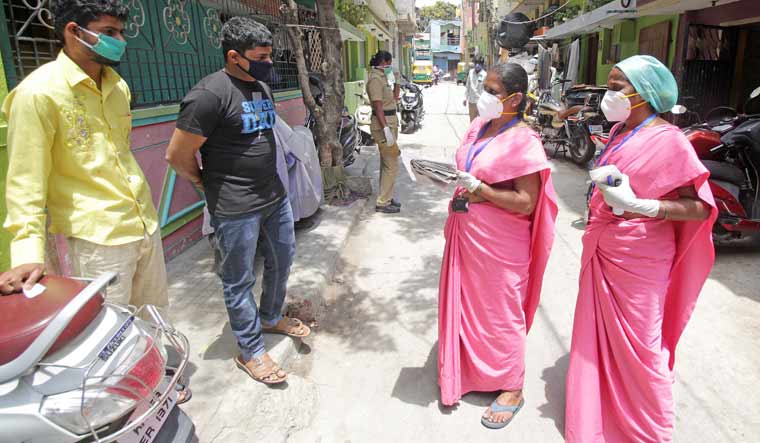 ASHA workers during a door-to-door survey, to screen people for COVID-19 symptoms, during a nationwide lockdown imposed in wake of the coronavirus outbreak, in Bengaluru | PTI

“Women trust me more than their families. But in a time like this, I cannot do justice to that faith,” says Asha Pandey, an ASHA worker in Gudumba area of Lucknow.

Pandey is part of the nine lakh plus accredited social and health activists who have been called upon by the government to reach out to the remotest corners of the country to tackle the COVID-19 pandemic. They are charged with door-to-door surveys, keeping an eye out for migrants and educating people about necessary precautions. A complete focus on the pandemic means that other duties have taken a backseat as health services deemed non-emergency have been put on hold.

For Pandey, who has been an ASHA for 13 years and currently looks after a population of 2,000 (with another ASHA), this means she is unable to provide immunisation to pregnant women or birth control methods. Even the calcium and iron tablets she has are running out.

“Men are not used to being at home. The women complain of the physical demands their husbands make on them. Women come to me begging for condoms, asking me to buy some but I am helpless”, says Pandey.

Since the start of the lockdown, Pandey has taken two women for delivery at the Community Health Centre (CHC). “For the pregnant women who say that their vaccines are due, I only offer them the solace that I have made a note in my register and will get to them as soon as the vaccines are available. If a pregnant woman cuts her finger on a knife and is at risk for tetanus, there is no way for me to get her an injection for even that,” she says in a dejected voice.

For ASHA workers, the pandemic has meant more hours of work and personal risk. They cover at least 25 houses in a day. They have been trained over the phone and in person by ASHA Sanginis, the health supervisor immediately above them.

Kaushalya Devi is one such ASHA Sangini who oversees 24 ASHAs in Lucknow’s Gosaiganj block, spread over 30 hamlets, covering a population of 28,141 people. She says that in addition to the training provided to them before the lockdown, she has been given one ‘blue mask’ (a surgical mask) which she has been washing and reusing. On Friday morning, she went to the CHC eight kilometres away to pick up three soaps each for the ASHAs under her.

“Three of my ASHAs have refused to work. They say ‘we have children, we have families’. How can we work without protection? How can we put them at risk?” she asks. She has been assured by the in-charge of the CHC that masks will be made available on Monday.

Neetu Chhaya, an ASHA from Lucknow’s Mohanlalganj block, bought a mask for Rs 50--much above the government mandated price--after much pressure from her family. “We have to save everyone’s lives while using whatever protection that is available,” she says. A primary school in her village has been converted into a quarantine ward and has housed seven people till date. “Reassuring their families is an important part of our work,” says Chhaya who has worked as an ASHA for 17 years.

Mamta Rani, an ASHA Sangini from Gosaiganj block in Lucknow overseeing 25 ASHA workers who cover a population of 27,670 people, says, “The fear is natural. Those ASHAs who are more educated have got over it. My husband, who is very supportive of my work otherwise, keeps telling me, ‘what is the need to work so hard. What if you fall sick?’”

But these frontline health workers soldier on. They also battle hostility from communities which they have served for many years. These are the same communities which used to address them as ‘Didi’ (elder sister), out of reverence and recognition for the essential work they do to keep rural populations, particularly women and children, healthy and safe.

Yet now, as Mamta who had been an ASHA worker since 2008 (before she became a Sangini in 2015) says, “Some people shut their doors on us. They warn us to keep away from their children”.

Urmila Devi, an ASHA from Nagar in Lucknow’s neighbouring Barabanki district, says that a swirl of rumours, triggered by social media, has made her work even more challenging. “People are fearful that contracting the virus means immediate death. I tell them, ‘look at me. I have a dupatta to cover my face. I wash my hands every half an hour. Has anything happened to me? Women are afraid to go for deliveries to hospitals for fear of contracting the infection”.

The overriding sentiment among these workers, however, is that the work must go on.

(Some names have been changed to protect their identities)