People rushed to stock up on essentials, defeating the purpose of social distancing 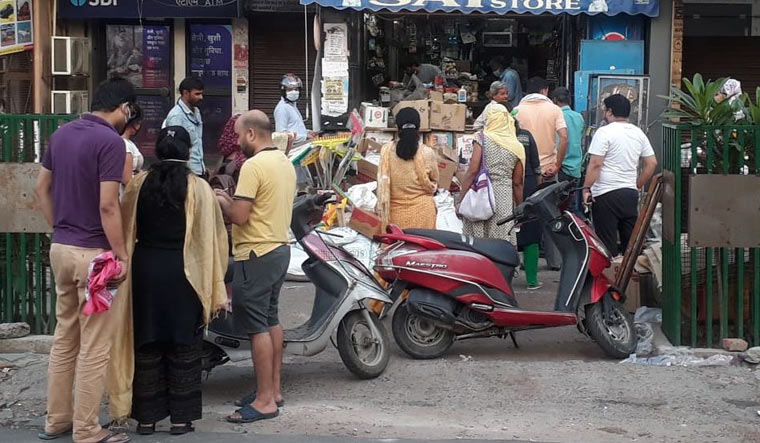 People waiting outside a shop in Lucknow to buy essentials after reports claimed that the government was sealing off the entire district.

As a section of media wrongly reported that the entire Lucknow district was to be sealed off in the wake of coronavirus spread, panic buying was witnessed in many areas of the Uttar Pradesh capital.

People were out in hordes and heavy traffic was seen by this reporter at Purania area of Aliganj, for instance. This area is dense with medicine and provision stores. However, it is not a COVID-19 hotspot that has been sealed off.

On Wednesday evening, as social media was flooded with reports about complete sealing off of the capital city, people stepped out of their homes to stock up on essentials.

Lucky Sachdeva, a medical store owner in the area, told THE WEEK, “There were at least three times more people in my store as compared to any other day since the lockdown started”.

One kilometer off, at Kapoorthala market, Ajay Mishra, the owner of a provision store said, “The police had been very strict and no customers had been allowed inside my shop for days. Yet around 4 pm this evening, a huge crowd descended on my store. I have just two helpers and struggled to shut shop at 6 pm as we could not cope with the numbers”.

At one large provision store at Jopling Road, the police had to assist in downing the shutters as the crowds were out of control.

Amish Kalra, a resident at Wazir Hasan Road, told THE WEEK, “When we first received the news via social media, I went out to get some essential supplies. There were so many people in my neighbourhood store that I would have had to wait for a couple of hours before getting anything. I thought it was safer to return home than risk the infection”.

Manish Pathak, the owner of a medical store in Mahanagar, said, “There was no substantial increase of customers in my store but the number of queries I get about availability of essential medicines from my regular customers went up manifold. People were under the impression that the district was sealed off till April 30”.

On Wednesday the state government announced that the hotspots in 15 districts which had reported more than six COVID-19 positive cases would be sealed off. However, as a list of such hotspots was not immediately announced, people assumed the worst and set out to get provisions and medical supplies. This clearly defeated the purpose of social distancing.

Media persons, who initially reported that 15 districts were completely sealed off, have blamed the lack of clarity from the government for the wrong reportage.

Misreporting, exaggerations, distortions and completely fake news have become rampant during the ongoing pandemic. For instance, there have been reports of people pelting stones at medical teams who reached out to test members of the Tablighi Jamaat. The state’s police have been consistently denying and calling out such news, warning news outlets to delete such reports.