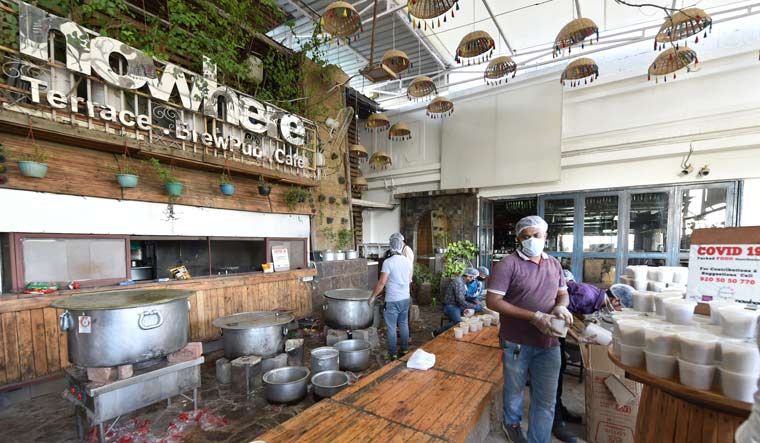 Food for distribution being prepared at 'Nowhere', a popular posh restaurant | Aayush Goel

Having being thrown out of business owing to COVID-19 lockdown, posh restaurants and even five-star hotels of Gurugram are now doubling as emergency kitchens for migrants and others. Various establishments in party hubs like Sector 29, Cyber Hub and DLF have been preparing meals for over 75,000 people daily. The food prepared and packed is transported to over 30 relief camps and slums of Gurugram by the local administration.

“Our key aim is to ensure nobody goes without two square meals a day. We have no screening, no parameters. Anybody who seeks food is provided the same by us. These posh establishments have put their chefs and kitchen staff on work, preparing balanced meals under specified sanitised conditions mandated by us. We, on an average, are feeding 75,000 people through these kitchens, and various invisible endeavors from local councillors and community associations too are keeping the city going”, said Gurugram Deputy Commissioner Amit Khatri.

“We are providing food packets everyday. The menu changes and ranges from vegetable khichdi to chana kulcha. Twenty people are working in kitchen at any point and time. We hand over food twice a day. Post COVID-19 lockdown, all breweries and restaurants like us have been shut and so we all have decided to be part of district administration's fight against COVID-19 and give back what city gave us. The food is prepared in highly sanitised conditions and we are inspected twice a day. The restaurants faced initial hiccups like lack of big utensils to cook and packaging boxes, but the same was arranged by the administration”, said Sameer who owns 'Nowhere' restaurant and brewery.

Other popular joints like 'Farzi Cafe', 'Prankster' and even 'Oberoi' too have joined the effort to ensure that nobody in Gurugram, a city with a large number of migrants, goes hungry.

“We started tying up with these people right on the day of janta curfew, and starting early gave us an edge. We devised and have been following a systematic food preparation, collection and distribution module. Majority of administration officials and even police are involved in the exercise. We have mapped all slum areas, urban ghettos and industrial worker zones, tied up with local NGOs, restaurants and councillors. Food is distributed at a regular time in local community centers and schools where social distancing can be maintained while doing so. We are also available 24X7 on phone and are delivering food at door steps of not just the poor, but students stuck in hostels, PGs or senior citizens unable to cook”, Haryana Shehri Vikas Pradhikaran (HSVP) estate officer Vivek Kalia, who is overseeing the arrangements, told THE WEEK.

While the administration may be successful in feeding all, they are often faced with issues like demand of burgers and pizzas in menu.