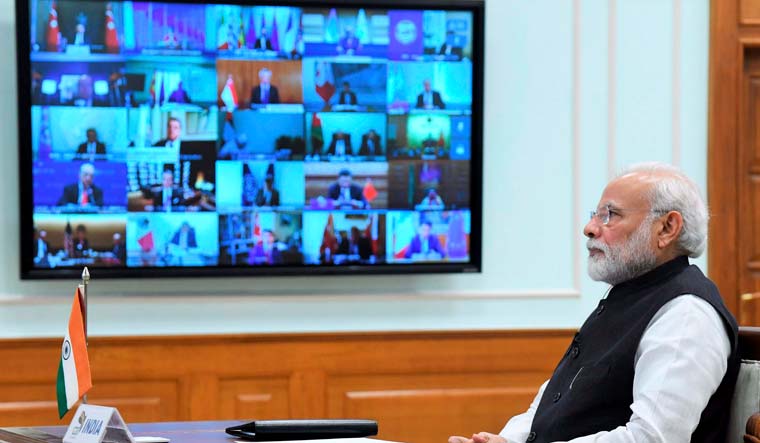 Prime minister Narendra Modi proposed a new form of globalisation at the extraordinary G20 virtual summit for COVID-19 that was held on Thursday. Human being, and their concerns, like climate change and terrorism, should be put at the centre, instead of economic and financial concerns, he said.

Noting that thousands of lives had been lost in the pandemic, the prime minister said that the new concept of globalisation should be about the collective interests of humankind.

The meeting, chaired by King Salman Bin Abdulaziz Al Saud of Saudi Arabia which holds the current presidency of G20, also had 20 other participants—invitee countries, heads of intergovernmental organisations such as the World Health Organisation (WHO) and International Monetary Fund (IMF) as well as representatives of plurilaterals like ASEAN and African Union.

Modi noted that the G20, which rose to prominence after the financial collapse of 2008, had done a great job in reviving the global economy, but somewhere, it was obvious that the focus of countries was on themselves, and not humanity as a whole.

Government sources said that his views were well received, and India and Modi were lauded for their initiative in inter-country cooperation for tackling the COVID-19 pandemic.

India had spearheaded a meet of South Asian Association for Regional Cooperation on March 15, the first inter-country heads of government virtual discussion on the subject. Australian Prime Minister Scott Morrrison, in fact, said that this extraordinary G20 summit was inspired by that initiative. As a source pointed out, the successful conduct of this meeting was a validation of the spirit of cooperation between nations, and it silenced critics who felt that government heads would not take out time for such a meeting, when they were busy tackling their own national crises.

Sources said that India’s national response to the pandemic was also appreciated. India began issuing travel advisories as early as January 15, then began cancelling visas from affected countries and finally locked down the entire nation this Wednesday.

The G20 nations have collectively pledged USD 5 trillion to counter the financial and economic aspects of COVID-19, the pandemic that has raged across all continents within weeks of it being first reported in Wuhan, China in December 2019. The leaders also committed to fund the WHO-led initiative COVID-19 Solidarity Response Fund, as well as the existing Coalition for Epidemic Preparedness, on an individual basis.

Almost 90 per cent of COVID-19 cases were reported in G20 nations, and 80 per cent of the deaths, too. However, the G20, which is the most powerful and influential grouping at present, said that the health infrastructure of poorer nations was not robust enough, and that “we stand ready to mobilise development and humanitarian financing [to nations in Africa, island nations and other least developed nations].”

The main concerns that were discussed at the meeting were how to fight the pandemic, safeguard the global economy, address disruptions in international trade and enhance global cooperation, especially in developing and least developed countries. There was great emphasis on ensuring the flow of medical supplies and agricultural products across the world. For instance, Chinese president Xi Jingping said, “I want to call upon all G20 members to take collective actions—cutting tariffs, removing barriers and facilitating the unfettered flow of trade…”.

Iran, in particular, has been hit by US-imposed sanctions, and as the worst-hit country in Asia after China, it has requested lifting those sanctions.

The need to revitalise intergovernmental organisation like the WHO was also felt. These organisations are still languishing in the last century, and need to be mandated with newer charters like early warning systems for pandemics and helping develop national and international response protocols to such events.

With almost the entire who’s who of the world at the virtual meeting, contentious issues like where the disease originated and why were kept out of the discussions. Instead, sources say, the focus was on how to deal with the pandemic—develop quick diagnostic kits, mobilise medicines and work together towards vaccine development. Modi emphasised on the urgency to share freely the fruits of scientific discovery.

King Salman said that the G20 could have another virtual summit before the Riyadh Summit in November. Thursday’s summit will be followed up by interaction between health administration officials and other stakeholders.