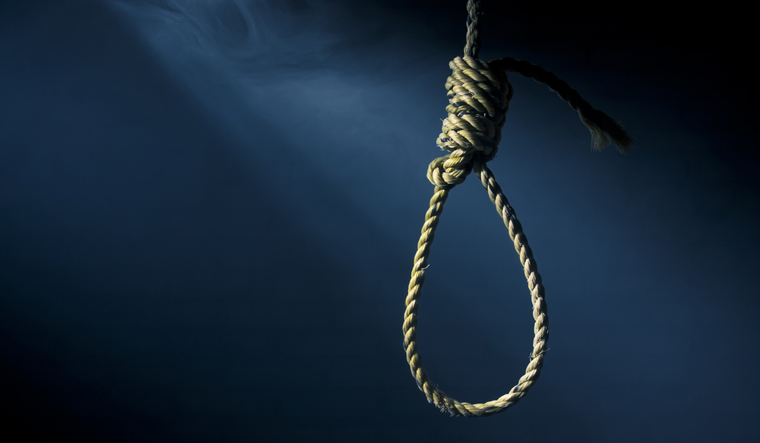 A couple allegedly committed suicide by hanging themselves after killing their minor daughter in Maharashtra's Thane district, police said on Monday.

Two persons were arrested on Monday night for allegedly abetting the suicide.

In a purported suicide note found on the mobile phone of one of the deceased, the couple alleged that their family members harassed them because of which they decided to take the extreme step, the police said.

The WhatsApp message was purportedly sent by the woman to her brother Srinath Kene, a resident of Dombivli.

After alerted, the police then rushed to the couple's house in Vaklan village and found them and their child hanging from the ceiling, Shil Daighar police station's inspector R K Mohite said.

The deceased have been identified as Shivram Patil (44), his wife Deepika (42) and their four-year-old daughter Anushka.

Patil worked in a rice mill in the locality. Preliminary probe indicates that the couple may have taken the extreme step due to domestic quarrels, he said.

"The couple first hanged the child and then killed themselves. A WhatsApp suicide note has also been found and is being verified. In the note, dated March 1, the couple said their family members were harassing them and hence, they decided to commit suicide," Mohite informed.

In the suicide note, signed by Shivram Patil and Deepika, the couple demanded stringent punishment for 13 relatives whom they named in the text, he said.

The official said Shivram Patil also mentioned in the note that their property be handed over to Deepika's brother, who in-turn should donate it to an orphanage.

Deputy Commissioner of Police (Zone I) S S Burse told PTI that a caller alerted the police about the deaths at 1 am on Monday.

The statements of those named in the suicide note would be recorded and further action would be taken accordingly, he said.

A case of murder would be registered against Shivram Patil and his wife for killing their child, he added.

Meanwhile, the arrested accused have been identified as Manohar Patil (39) and Vaibhav Patil (29), whose names were found mentioned in the suicide note.

They were booked under sections 306 (Abetment of suicide) and 201 (Causing disappearance of evidence of offence, or giving false information to screen offender)  of the Indian Penal Code (IPC), a police official said.