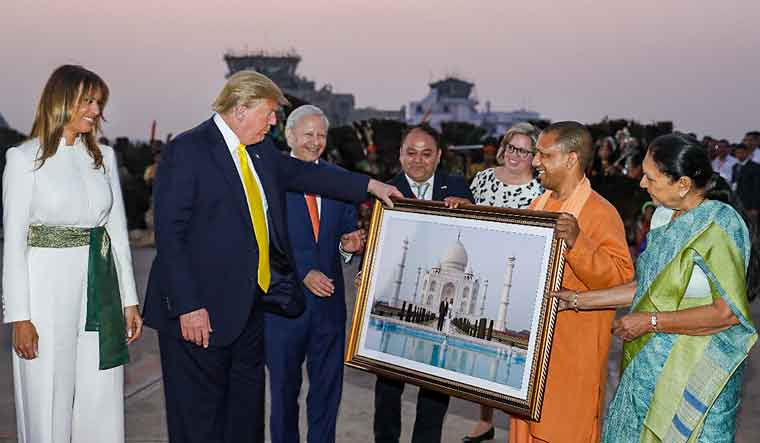 Uttar Pradesh Chief Minister Yogi Adityanath presents a framed photograph to US President Donald Trump as First Lady Melania Trump, UP Governor Anandiben Patel and US Ambassador Kenneth Juster look on, during their visit to the historic Taj Mahal in Agra on Monday | PTI

When Uttar Pradesh Yogi Adityanath presented a framed photograph of Taj Mahal to US President Donald Trump and First Lady Melania Trump ahead of their visit to the iconic Indian landmark on Monday, irony just died a slow death. Both Adityanath and Trump are united by a common trait—both do not shy away from making anti-Islamic statements.

Nothing could be more paradoxical as it was less than three years ago that Adityanath had denounced Taj Mahal, one of the seven wonders of the world. In June 2017, Adityanath had made headlines when he said miniature replicas of the Taj, offered often as gifts to foreign dignitaries, were inappropriate offerings because they are not representative of Indian heritage. The UP chief minister's dislike for the iconic mausoleum, built by Mughal emperor Shah Jahan to mourn the death of his queen Mumtaz Mahal who died in 1631, is no secret.

Soon after coming to power in Uttar Pradesh in March, 2017, Taj Mahal, a UNESCO world heritage site, failed to find mention among the Adityanath government's list of cultural heritage sites in the state. The booklet issued by the UP government had removed Taj Mahal and instead, carried the name of temples from Mathura, Ayodhya and Gorakhpur in the list.

This was soon followed by a spate of incidents where BJP leaders went on a verbal rampage against the Taj. UP BJP legislator Sangeet Som had even alleged that the Taj was built by "traitors" who wanted to eliminate all Hindus.

However, after having irked the residents of Agra, Adityanath was soon on damage control mode as he became the first chief minister to visit the heritage site in October 2017 and images of him sweeping the western gate of the Taj Mahal went viral. "There was no need to go into who built Taj and why. More important is that it was built by the blood and sweat of Indians," he then said, refering to the controversial statements made by him and his party colleagues about the Taj.

The POTUS, too, is unpopular for his Islamophobia. Soon after the terrorist attack at two mosques in New Zealand's Christchurch that killed 49 people, Trump had tweeted a link to an article that called Muslims "rapefugees". However, he later deleted the tweet. He had even alleged that his predecessor Barack Obama was secretly Muslim. Soon after he came to power, President Trump hinted at building a database to track Muslims in the US. He had also famously claimed that "thousands" of Muslims had cheered the destruction of the World Trade Centre in 2011.