Sea cucumbers worth Rs 4.26 cr seized in Lakshadweep; why they are so valued 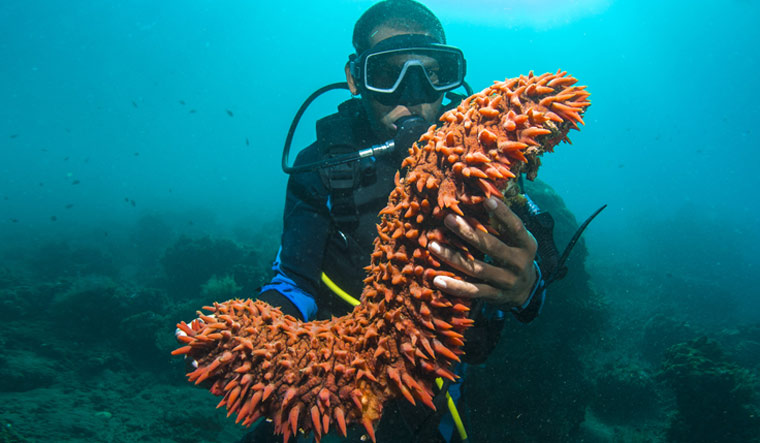 In a major haul, 1,716 sea cucumbers were seized in Lakshadweep recently. The sea cucumbers, weighing 852 kg, were meant to be smuggled to Sri Lanka.

The value of the seized sea cucumber in the Indian market is estimated to be around Rs 4.26 crore.

Based on a tip from fishermen, Sea Cucumber Protection Task Force seized the Sea cucumber shipment from the uninhabited Suhali island. Suhali is about 60km from Kavaratti, the capital island of Lakshadweep.

Sea cucumbers, so named because of their resemblance to the vegetable, are single-branched marine organisms generally found on the sea floor. These marine creatures possess leathery skin and an elongated body containing a single-branched gonad.

Classified as an endangered species, sea cucumbers are protected and their harvest is prohibited under the Wildlife Protection Act.

These slug-like animals are in great demand in Sri Lanka and other Southeast Asian countries and China for use as a culinary delicacy and in preparing medicines. Since they taste bland, they are often mixed with other seafood, meat and spices.

They can also be eaten raw, fried or pickled, and is often combined with farm produce like Chinese cabbage, winter melon and shiitake mushrooms. However, people mostly prefer to eat it in dried form—known as beche-de-meror trepang and consumed along with soups, stews and stir-fries.

The smugglers catch sea cucumber from Lakshadweep and later transport it to Sri Lanka as a frozen item.

The main reason for the smuggling is the high price sea cucumber fetches in the international market.

Fishermen from states on the mainland, mostly from Tamil Nadu, come to Lakshadweep to hunt the endangered species with the assistance of local people.

After receiving information from fishermen that the sea cucumbers were ready for export, authorities reached the spot, following which the smugglers left the boat and fled. Subsequent inspections were carried out at sea and preparations for the shipment were found.

Official sources said the investigation is in progress and they have got information about the persons behind it. A report on the seizure has been submitted to the Androth Island Judicial Magistrate's Court.

There was no legal hurdle in catching sea cucumbers two decades before. But since they were listed in the Wildlife Protection Act of 2001, the ban came into effect. Previously, sea cucumbers were directly shipped overseas, but the current method is to clean and freeze them using preservatives before dispatching.