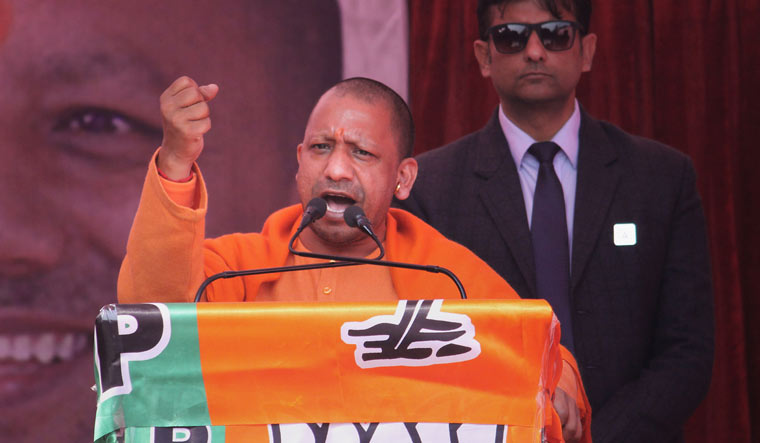 It has only been a couple of days into the election campaigning for the upcoming Delhi Assembly polls, and Uttar Pradesh Chief Minister Yogi Adityanath is already in the eye of the storm for his provocative remarks.

In a series of rallies in the national capital, Adityanath brazenly painted all those protesting against the Citizenship (Amendment) Act, and those supporting them, with the “terrorist” brush. He also dropped a veiled warning to the protesters—albeit in the context of the Kanwar Yatra—that if words cannot convince the protesters, bullets will.

Terming the Shaheen Bagh protest a malicious attempt to disturb peace and normal life, he said that those who supported terrorists in Kashmir were staging protest in Shaheen Bagh and raising slogans of 'azadi'.

Hundreds of people, including women and children, have been protesting in Shaheen Bagh since December 15 against the amended law and the National Register of Indian Citizens, calling it discriminatory and targeted against Muslims.

At a rally in Karawal Nagar Chowk in support of BJP candidate Mohan Singh Bisht and Mustafabad's sitting MLA Jagdish Pradhan, Adityanath said the anti-CAA agitation was "against India" and an attempt to "malign the image" of the country. "It is a roadblock in realising the dream of 'Ek Bharat Shrestha Bharat'," he said.

The UP chief minister also attacked his Delhi counterpart Arvind Kejriwal, alleging he and his party were siding with protesters at Shaheen Bagh and that a Pakistan minister and AAP were speaking in similar terms.

"How did it happen? We don't know where all their (AAP's) links are," he said, referring to a tweet on Friday by Pakistan's Minister of Science and Technology Fawad Hussain on Delhi polls.

Kejriwal had responded to him on Friday, saying the Delhi election was an internal matter of India and any interference by Pakistan, the biggest sponsor of terrorism, will not be tolerated.

"People of Delhi, you have to decide, whether you want better health, better education facilities, better environment, metro services or whether Delhi needs Shaheen Bagh. I am here to tell you that," Adityanath said, amid chants of 'Yogi, Yogi' and 'Jai Shri Ram'.

At another rally, he sustained his attack on AAP, saying, "Kejriwal cannot even provide clean drinking water to the people of Delhi... According to a (BIS) survey, the Delhi government is making its people drink poisonous water. But it is supplying biryani to those protesting in Shaheen Bagh and elsewhere in the city."

Meanwhile, the Aam Aadmi Party has asked the Election Commission to ban Adityanath from campaigning in Delhi over his alleged provocative speeches.

AAP leader Sanjay Singh also demanded an FIR against him for his remarks.

Singh told a press conference in Delhi that it has been 48 hours since the AAP asked the Election Commission time to meet them but it has not been granted.

"If the EC does not give us time, we will stage a sit-in in front of the ECI office on Monday," Singh said.

Continuing his attack on the anti-CAA protesters, at a third rally in support of BJP candidate Vijender Gupta in Rohini, an unperturbed Adityanath said, "You should understand what they want, what they think about India, where are they taking it. If they indulge in rioting or arson.... In Uttar Pradesh, I told the administration to make them pay for the damages and we seized their property," the firebrand BJP leader said.

The UP CM also said that since Narendra Modi became the prime minister, "we have been identifying every terrorist and feeding them 'goli' (bullet) instead of biryani".

"Let Kashmir remain in peace. If you will speak the language of Pakistan, in favour of Pakistan, the soldier's gun will show you the way to hell," he said.

He invoked the 'goli' yet again when he was talking about the Kanwar Yatra—an annual pilgrimage of Shiva devotees of Shiva, known as Kanwariyas, to Haridwar, Gaumukh and Gangotri in Uttarakhand and Sultanganj in Bihar to fetch water from Ganga.

There have been clashes between the locals and Kanwariyas in the past along their route to the pilgrimage centres. Referring to the arrangements his government made for the pilgrims, Adityanath said that he had even ordered that flower petals be showered on them from helicopters. But state authorities warned him that it will lead to communal clashes. “I told them that we do not obstruct anyone's festival or faith. Let everyone celebrate festivals within the framework of the law. Lekin Shiv bhakto par goli chalayega koi vyakti, danga karayega... boli se nahi manega toh goli se toh maan hi jayega (If anyone opens fire at devotees of Lord Shiva, causes riots... If they don't listen to words, they will surely listen to bullets.)”

The Election Commission will be under pressure to take cognisance of Adityanath's remarks in the backdrop of the firing incidents at Shaheen Bagh yesterday and at Jamia Millia Islamia on January 30. A man, identified as Kapil Gujjar, fired two rounds at the Shaheen Bagh protest venue, while, on Thursday, a minor fired at protesters at Jamia Millia Islamia, injuring a Jamia student.

On Thursday, the Election Commission had banned Union minister Anurag Thakur and BJP MP Parvesh Verma from campaigning for 72 and 96 hours, respectively, in view of their provocative comments at an election rally in the city earlier this week. Thakur, while addressing a election rally, had raised the slogan of desh ke gaddaron ko' (traitors in the country) as the crowd responded with goli maaron sa***n ko'.

The next day, Verma said protesters at Shaheen Bagh could "enter homes and rape our sisters and daughters”.