Outlay for NATGRID for linking databases to combat terrorism increased 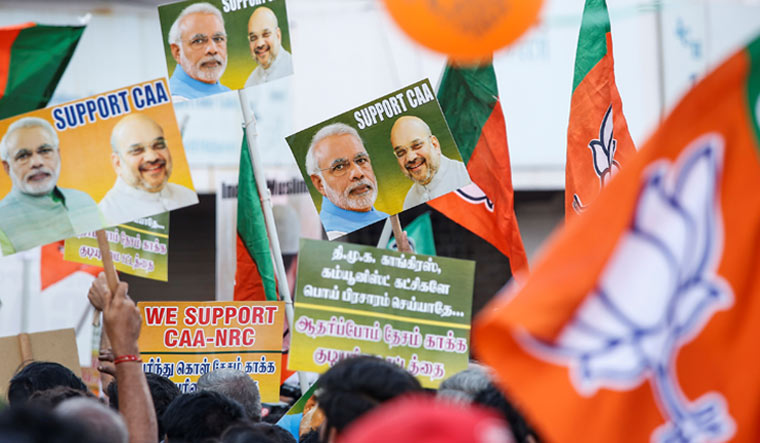 Increased budgetary outlay for Census 2021 and a slashed allocation for rehabilitation of refugees in the country in the Union budget 2020 reflects the clear focus of the government in rolling out the Census 2021 and updating the National Population Register beginning April. The move comes even as protests against the Citizenship (Amendment) Act and National Register of Citizens (NRC) are keeping the security forces on their toes.

Budget 2020 has set aside Rs 4,568 crore under Census, Survey and Statistics, which includes provisions for office of the Registrar General and Census Commissioner of India, and various schemes of Registrar General of India, including National Population Register (NPR) and expenditure on Census 2021. The budgetary allocation for the RGI was Rs 1,121.33 crore in 2019-2020.

On the other hand, the Union Home Ministry's budgetary allocation for Relief and Rehabilitation for migrants and repatriates—a separate provision under the MHA's demand for grants—has been slashed by three times. This particular provision was allocated Rs 792.36 crore in 2019-2020 and has been brought down to Rs 205.83 crore in Budget 2020.  It covers rehabilitation of refugees from Sri Lanka who are staying in camps; expenditure on refugees from Tibet and former West and East Pakistan; relief and rehabilitation assistance to North Eastern States of Tripura, Assam and Mizoram; enhanced compensation to 1984 riot victims, and the land boundary agreement between India and Bangladesh.

Meanwhile, the outlay for the ambitious National Intelligence Grid has increased from Rs 43.77 crore to Rs 52.17 crore. The aim of the NATGRID is to mine data in a way that is accessible to law enforcement agencies by connecting all important databases like Aadhaar, PAN card, telephone numbers, bank details, etc. While privacy of citizens is still a huge concern, government sources said the NATGRID aims to link databases as an input in combating terrorism. It intends to create a facility to improve capability to counter internal security threats, said the home ministry.

The year 2019 also saw the withdrawal of SPG cover for the Gandhi family bringing the security force under the lens. Notwithstanding the controversy regarding the duties assigned to the SPG, which provides proximate security to the prime minister, former prime pinisters, members of their immediate family and other protectee, the budgetary allocation for the force has been increased from Rs 540.16 crore to Rs 592.17 crore.

With increasing cyber threats looming large on critical infrastructure and digital databases being created by the government, the National Cyber Crime Coordination Centre (NCCC) has got an increase in its budget from Rs 46.75 crore to Rs 79.80 crore. The office of the NCCC has become one of the most important offices in the national security council secretariat today. It had been created by the Modi government during its first term when cyber security had become one of the major concerns for the government while rolling out the Digital India scheme.

Meanwhile, the Intelligence Bureau has also got an increase in its budget from Rs 2,445.78 crore to Rs 2,575.25 crore to meet the administrative expenses of the central intelligence agency gathering intelligence on the internal security front.

The budget for the Delhi police, responsible for maintaining and enforcing law and order in the National Capital Territory of Delhi, also saw a minimal hike from Rs 8,083.88 crore to Rs 8,242.46 crore.

However, the Nirbhaya fund transfer under schemes for safety of women has seen a significant jump from Rs 50 crore to Rs 855.23 crore. This fiscal year is expected to see increased spending on women safety and cyber crime. The provision provides for transfer of funds to Nirbhaya Fund in the public accounts and expenditures, National Emergency Response System and Cyber Crime Prevention against women and children. This also includes the safe city project and schemes for safety of women implemented by the Delhi police.