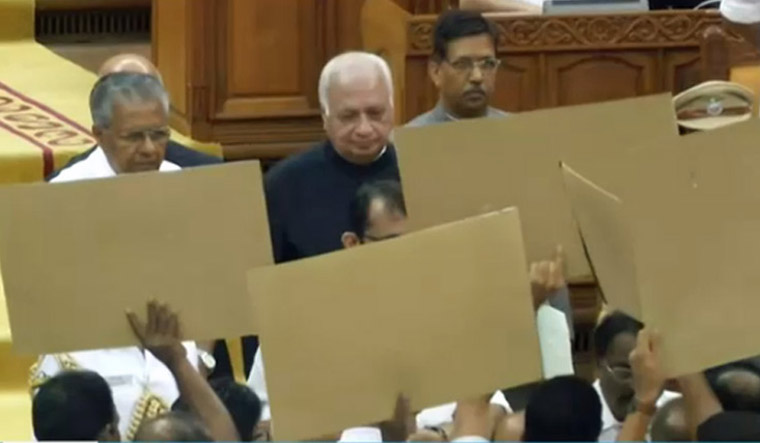 All eyes were on Kerala today as Governor Arif Mohammad Khan addressed the assembly for the first time after the state unanimously passed a resolution against the CAA. Everyone was curious to know whether the governor would read out the paragraph on the resolution against the legislation, or whether he will skip it.

Surprising everyone, he read out the resolution. "Our citizenship can never be on the basis of religion as this goes against the grain of secularism, which is part of the basic structure of the the Constitution. This august body unanimously passed the resolution requesting the government to abrogate the CAA," he read, while addressing the assembly.

But, the governor did make his differences clear before reading the portions on CAA. "I will read it because the honourable chief minister [Pinarayi Vijayan] wants me to read it. Although I hold the view that this does not come under the definition of policy or programme. But, the chief minister has said in his letter that this is the view of the government. So, to honour him, I will read, though I disagree," he said, before reading out the paragraph.

There were media reports that the governor would not be reading the portions about CAA. But, when asked by the WEEK earlier, the governor had clearly said that he would read out the entire speech. "It is my responsibility to read out whatever I have been given. I may state my differences openly. But I will read the entire speech," he had said.

Kerala has been witnessing a stand-off between the governor and the state government, with Khan criticising the anti-CAA resolution passed by the assembly, and the petition filed by the government against Citizenship Amendment Act in the Supreme Court. The assembly, however, witnessed huge drama as opposition UDF tried to block the entry of the governor.

The Congress had given notice for resolution against the governor, and mounted pressure on the government by alleging that Kerala Chief Minister Pinarayi Vijayan had not yet openly spoken against Khan owing to a "secret pact with the BJP government". After the governor's speech, opposition Leader Ramesh Chennithala said that the secret understanding between the CM and the governor is out in the open now for everyone to see.