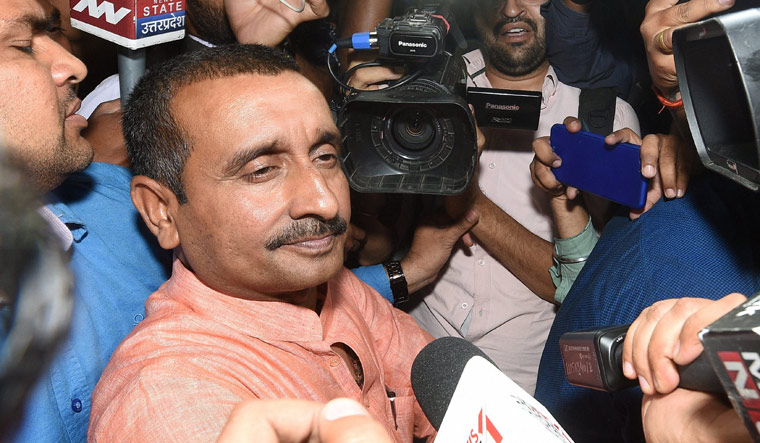 The appeal filed in the Delhi High Court by Kuldeep Singh Sengar, the BJP MLA convicted of raping a minor in Unnao, against his conviction by a sessions court cites mobile phone locations as evidence of his purported innocence.

Sengar has challenged the conviction on the basis of what he claims as “misreading evidence, which had been adduced on record and drawing ‘error-ridden conclusions’, leading to an unjust and unfair conviction of the appellant.”

Documents accessed by THE WEEK read that, among other instances of misreading of the mobile phone location of the accused, the court erred in judging the location of the Apple iPhone on which he had received a call of 44 seconds at 20:30:53 hours on June 4, 2017, the day of the alleged rape. This is relevant as in court Apple had denied having any data on the location of Sengar’s phone.

Sengar’s plea reads “The learned trial judge committed a fatal error in as much as if the appellant allegedly committed rape upon the prosecutrix from 8:00 pm to 8:30pm, yet in a matter of 53 seconds he would not have covered a distance of around 14km to reach his office in order to attend a call at 20:30:53hrs at his office, which was captured by the cell tower located at Civil Lines, Unnao, which is at a distance of 300 meters from his office.”

“This was an impossible proposition by any stretch of imagination, leading to the inescapable conclusion that the appellant was innocent, falsely charged and the allegations were proven to be false on record, on evidence or even otherwise,” the plea argues.

The appeal further points out the judge’s erroneous pronouncement that the two mobile phones (with three SIM cards) belonging to Sengar were in opposite directions during the duration of the crime.

While the iPhone was with him, the other phone bearing two SIM cards was with an alibi. This, according to the defence, is an erroneous reading of the cell tower locations of the phones. One cell phone, as per the CBI investigation, was at Kanpur while the other was at Jajmau (in Unnao). “(These) are in opposite directions and faraway areas. …(There is a) fatal error by wrongly writing cell location 'Jajmau' … (when it) was ‘Millatnagar, Kanpur'. Technically while the judge read the cell tower number as '04f45507e10517' (Unnao), as per the CBI’s own findings, the correct cell tower number was '04f45507e33517' (Machharia, Kanpur).”

The appeal notes that evidence of the presence of the cellphones shows that the appellant was from 12:20pm till around 8:30 to 8:45pm at his Unnao city office, after which he left for Kanpur in order to attend a private ceremony.

Vimal Kumar Yadav, the Unnao-based junior of Mahendra Singh (the lawyer who was injured with the rape survivor in the accident in 2019 that killed two of her aunts), told THE WEEK, “It is highly improbable that the learned judge would have misread the vital evidence provided by the CBI. As Apple had refused to divulge the location, the CBI evidence was all that the court had to go by.”

The High Court has directed the CBI and the prosecution to respond to the defence and listed the matter for May 4.