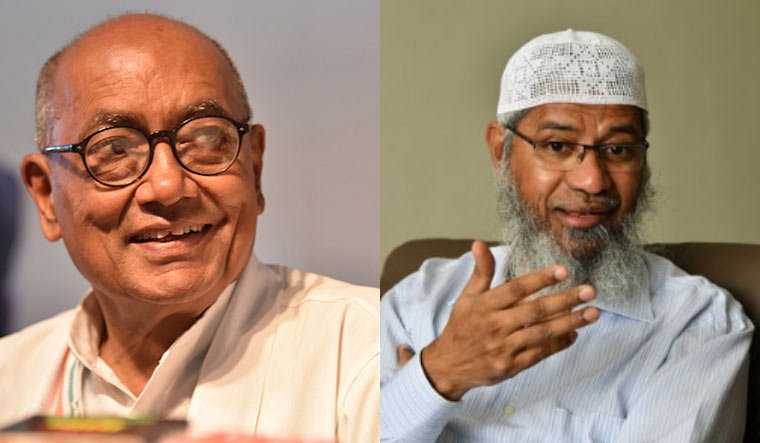 (File) A collage of Digvijaya Singh (left) and Zakir Naik

Controversy has erupted after Congress Rajya Sabha member Digvijaya Singh tweeted asking Prime Minister Narendra Modi and Home Minister Amit Shah to come clean on recent allegations made by Islamic preacher Zakir Naik. Naik had released a video last week claiming Modi and Shah had, through an emissary, offered him safe passage to India in exchange for supporting the abrogation of Article 370 in Jammu and Kashmir.

Singh, who has also been a two-term chief minister of Madhya Pradesh, posted a series of tweets on Wednesday, sharing the video of Naik making the allegations against Modi and Shah. The Congress leader commented that Modi and Shah were involved in “trading” with Zakir Naik, whom they themselves called a deshdrohi (traitor). “What is their strategy?” Singh asked, referring to Modi and Shah.

Writing in Hindi, Singh further tweeted that when people disagree with Modi and Shah, then the two leaders “1. Try to make them agree; 2. If not, threaten them; 3. If they still do not agree, try to lure them with post and money; 4. If they still do not agree, malign them with false allegations; 5. If they agree, all allegations are retracted and if not, then declare them traitors and publicise this widely; 6. If there is such occasion when they (dissenters) could be used, they (Modi-Shah) do what Zakir Naik has mentioned”.

Later, responding to a tweet by a national television channel quoting BJP spokesman Gaurav Bhatia’s allegation that the Congress always supported Zakir Naik, Digivijaya Singh tweeted that this was an absolutely wrong allegation.

“Congress never officially supported Zakir Naik. It is true that I had addressed a communal harmony conference in Mumbai from his platform, but you can go through his (Naik’s) speech in that conference, at no point he made any communally sensitive statement,” Digvijaya tweeted.