We put petrol in Afzal Guru's a***, I had reputation for torture: Davinder Singh

Davinder himself admitted to meeting Afzal Guru and even torturing him 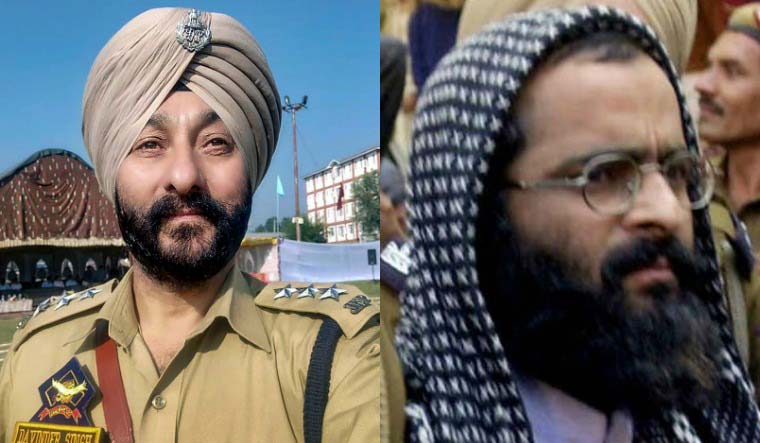 A collage of Davinder Singh (PTI) and Afzal Guru

The arrest of Jammu and Kashmir deputy superintendent of police Davinder Singh on January 11 for accompanying two Hizbul Mujahideen militants to Jammu is continuing to make headlines.

The opposition Congress on Monday asked whether Singh had a role in the 2001 attack on Parliament and the suicide attack at Pulwama that killed over 40 CRPF jawans in 2019. The Congress alleged Davinder Singh was being used as a “pawn”.

Media reports about Davinder Singh have highlighted his links to Parliament attack accused Afzal Guru, who was executed in 2013.

In a letter to a Supreme Court lawyer in 2004, Guru mentions he met Davinder Singh at the Humhama STF camp when he was arrested in 1998-2000. Guru, a surrendered militant, claimed he had been arrested by police for not working with the STF. Guru had claimed Davinder had directed him to take one man, Mohammad, a co-accused in the Parliament attack case, to Delhi in 2001 and to purchase a car.

Davinder himself admitted to meeting Afzal Guru and even torturing him, but denied claims of sending him to Delhi. In an interview with journalist Parvaiz Bukhari in 2006, Davinder Singh, shockingly, gave details of how Guru was tortured. The interview was published in Arundhati Roy's book The Hanging of Afzal Guru and the Strange Case of the Attack on the Indian Parliament. Excerpts of the interview were republished by Scroll.in after Davinder Singh's arrest.

Davinder told Bukhari, "I did interrogate and torture him at my camp for several days... we did pour petrol in his arse and gave him electric shocks. But I could not break him. He did not reveal anything to me despite our hardest possible interrogation."

Davinder Singh boasted that he had a reputation for "torture, interrogation and breaking suspects". "If anybody came out of my interrogation clean, nobody would ever touch him again. He would be considered clean for good by the whole department," Davinder Singh told Bukhari.

In his letter, written in 2004, Guru gave details of the torture he was subjected to by Davinder Singh and others.

Guru wrote, "DSP Vinay Gupta tortured me, electrified me, put me in cold water, used petrol, chillies and other techniques... Then they took me to Humhama STF camp where D.S.P. Davinder Singh also tortured me. One of his torture inspector, as they called him, Shanty Singh, electrified me naked for 3 hours and made me drink water while giving electric shocks through telephone instrument." Guru claimed he was let go after his family sold his wife's gold to obtain Rs 80,000. The police allegedly also forcibly took his then brand-new scooter.

Davinder Singh, a decorated police officer, joined the Jammu and Kashmir Police as a sub-inspector in 1990 and was inducted into the Special Operations Group, a unit meant to combat militants, in 1994.

The Jammu and Kashmir Police announced on Monday that Davinder Singh had been suspended.