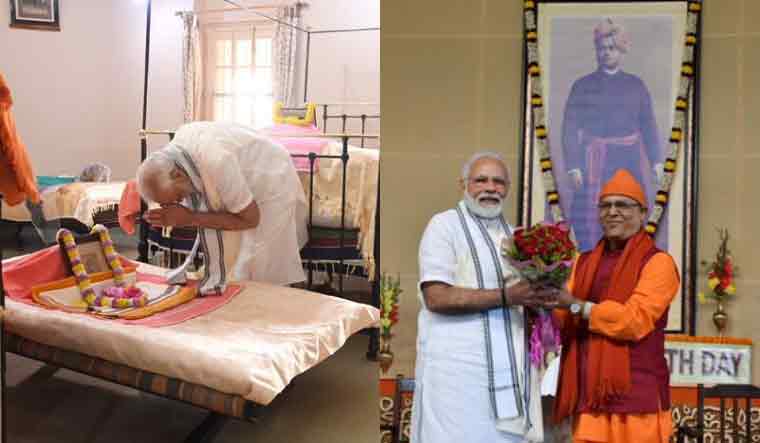 Prime Minister Narendra Modi on Sunday paid tribute to Swami Vivekananda on his birth anniversary at the Belur Math, the headquarters of Ramakrishna Mission in Howrah. "This is like homecoming," said the prime minister, a follower of Vivekananda's teachings, addressing a crowd gathered to take part in the morning prayer meeting at the Math premises. "Swami Vivekananda inspires youth... The last time I came here, I had taken the blessings of Swami Atmasthanandaji. Today he is not physically present with us. But his work, his path, will always guide us in the form of Ramakrishna Mission," Modi said.

The prime minister also raised the contentious citizenship law during his address. "CAA is about giving citizenship. Some youth are still misinformed. CAA won't snatch anyone's citizenship, but the act is to grant citizenship," Modi reiterated at the Belur Math.

On Sunday, Modi became the first prime minister to stay overnight at the Math in Kolkata'a neighbouring Howrah district. He woke up early on Sunday and visited the temple of Swami Vivekananda to pay respect to the spiritual leader, mission officials said.

The prime minister was received by senior monks of the order on Saturday after he reached Belur Math on Saturday evening, taking the river route from Kolkata. The PM is on a two-day visit to the city.

The link between the prime minister and the Ramakrishna Mission goes back to mid-60s when a teenager Modi, inspired by the teachings of Swami Vivekananda, had arrived at the Mission's Rajkot branch in Gujarat and expressed the desire to join the order.