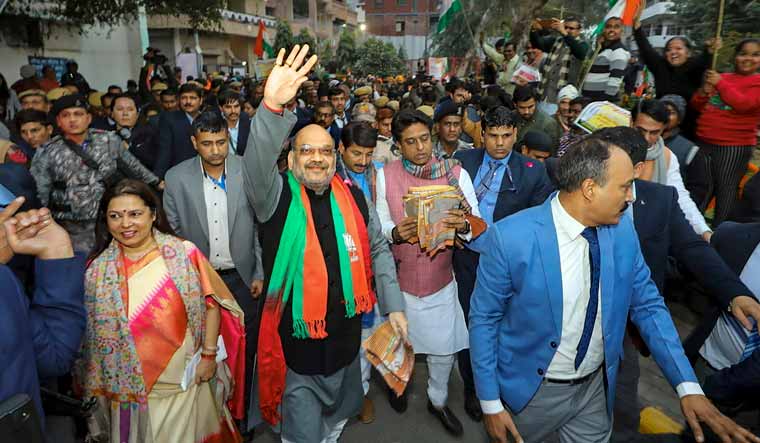 When BJP chief and Home Minister Amit Shah launched the party's door-to-door campaign to raise support for the Citizenship (Amendment) Act this week, it was expected to be an opportunity for pristine photo ops.

However, on the first day of the campaign on January 5, Shah's visit to the Lajpat Nagar locality of Delhi was interrupted by two women shouting slogans from their apartment.

Surya Rajappan, a lawyer from Kerala, and her friend, Harmita, a native of Uttar Pradesh, had reportedly prepared banners to raise during the visit by Shah and shouted slogans against the NRC and Citizenship Act. BJP supporters accompanying Shah shouted counter-slogans. Shah left Lajpat Nagar after visiting nine homes and a temple and distributing leaflets on the Citizenship Act.

However, the trouble for Surya and Harmita had just begun. In a statement issued to the media, Surya noted that a large crowd had gathered and began to "verbally harass and intimidate us by shouting out threats and derogatory/misogynistic remarks". Surya said the mob numbered around 150 people.

"A group broke apart from the mob and forced their way up the stairs, which lead to our residence and threatened to break down the door if we did not let them in..." Surya alleged. She said the group kept banging on their door until police intervened.

She alleged her landlord was part of the mob and had bolted the stairway, trapping them. When the two women called their friends for help, the mob "pushed them around and threatened them with more physical violence," refusing to let them in.

The two women were trapped for around three-to-four hours and the landlord claimed they had been evicted. Finally, Surya's father and a police officer entered the premises and recorded their complaint against the mob. The door to the stairway was unlocked after seven hours and the two women were allowed to leave under police protection.

Surya wrote, "Over the course of the last 48 hours, we have feared for our lives and for our safety; our character and upbringing have also been questioned (as is now customary when any Indian woman speaks out against the BJP)..."