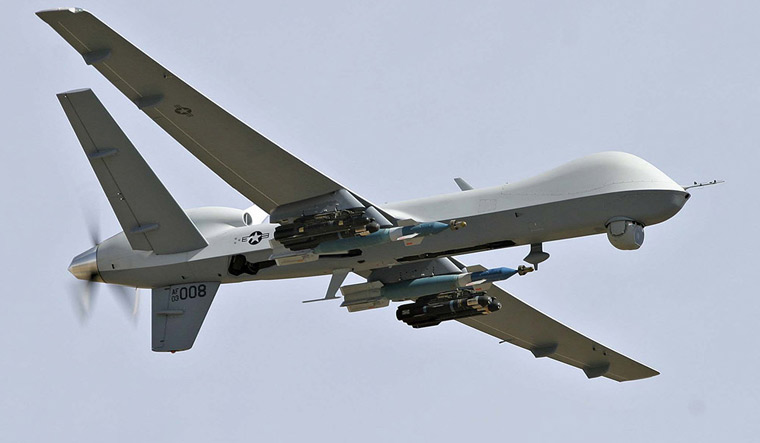 The MQ-9 Reaper drone and the Hellfire missile: One a high-flying, silent and deadly unmanned aircraft that made its first appearance in 2001, the other a staple missile of US military aircraft since the 1980s.

The combination of the Reaper and the Hellfire is what reportedly killed Iranian general Qassem Soleimani on January 3. In a post-midnight operation, the remotely-piloted MQ-9 launched two Hellfire missiles at Soleimani’s car and convoy, killing 10 in total.

The Reaper is no stranger to targeted assassination missions. In November 2015, it was used to kill ISIS member Mohammad Emwazi—otherwise known as ‘Jihadi John’—while he was traveling in a vehicle in Raqqa, Syria.

Given the platform's proven capabilities, India has been in talks with the US for years now to acquire it. Most recently, in August, it was reported that India planned to tailor the UAV for use by all three services of the Indian Armed Forces.

In addition, the Hellfire missiles made their way into Indian armories after the acquisition of AH-64 Apache helicopters, whose primary munition is this missile.

The Reaper drone, developed by General Atomics Aeronautical Systems, is an unmanned aerial vehicle (UAV) capable of remotely controlled or autonomous flight operations. According to the US Air Force, the MQ-9 Reaper is an “armed, multi-mission, medium altitude, long-endurance” aircraft primarily designed for offensive strikes.

With a wingspan of 66 feet and the capability to cruise at roughly 230 mph (482 kph), the UAV can also conduct surveillance, and assist in search and rescue missions. An improvement over its predecessor, the MQ-1 Predator, in terms of size and robustness, Reaper drones have become the reliant carrier for launch munitions in order to annihilate targets. The US Air Force is in possession of 93 units of the Reaper drones.

India’s tryst with Reaper drones began way back in 2016—when news regarding India’s planned acquisition of Reapers first surfaced. Initially, India’s intention was to acquire 22 naval variants of the Predator B drone, called the Sea Guardian, for the Indian Navy. In 2019, a report in the Breaking Defense website claimed that the Pentagon and Indian Ministry of Defence were working together to “tailor” standardized versions of the Predator B Reaper drone for use by all three armed services. The Reaper drones could be the new addition to the line of drones operated by the Indian Army, which includes the Israeli Harop attack drone and the Heron surveillance drone.

The US’s designation of India as a Major Defence Partner has made it easier for India to facilitate faster negotiations for acquisitions of military equipment from the superpower. The goal of the designation was to create a tighter defence participation between India and the US and to promote better cooperation and coordination in the field of defence and security.

The AGM-114 Hellfire missiles are air-to-ground, laser-guided, subsonic missiles with significant anti-tank capacity. The Hellfire missiles have several variants, depending on its warhead, guidance system, and its physical variations. A latest and peculiar addition to the line of Hellfire missiles is the Hellfire R9X that uses pop-out sword blades to kill targets with minimal collateral damage—designed for targeted killings. According to Al Arabia, this may have been the variant of the Hellfire missile used to assassinate Soleimani.

In the US, the carriers of these missiles vary according to the armed services—the Air Force carries Hellfire missiles in its Predator and Reaper drones, while the Army carries it in its Apache helicopters.

In 2015, the IAF announced a deal for 22 Apache choppers, equipped with fire-and-forget Hellfire missiles, at a cost of $1.4 billion. The Army soon followed up with its own order for six aircraft in 2018, for $930 million. In late 2019, it was reported that India was set to sign a $930-million deal with the US government for six Apache attack helicopters, with the similar Hellfire missile variant, for the army, under the US foreign military sales programme. The induction process of these helicopters into the Air Force is currently in progress.

The induction of these drones and missiles into the Indian military, both systems being in line with the latest technological advancements in warfare and combat, signifies India’s progress towards modernising its military capabilities. The signing of COMCASA and the acquisition of Major Defence Partner status have also helped India acquire such technologies from the US.