BJP will remove every single infiltrator from India, Shah said in April this year 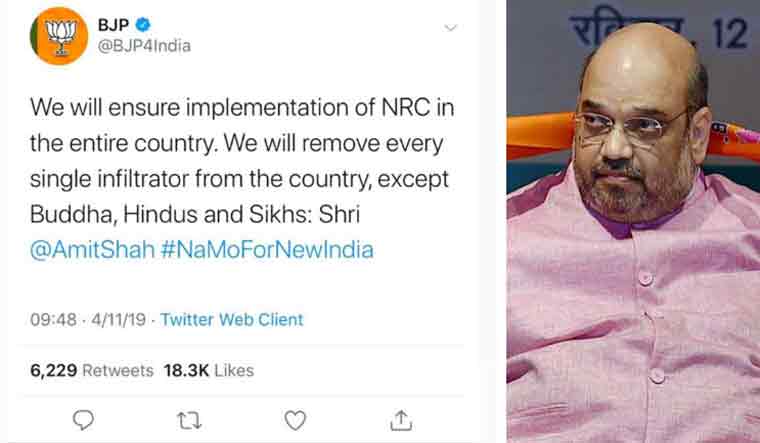 While it is not clear when the tweet was removed from BJP's Twitter handle, it poses some questions in the current circumstances

Prime Minister Narendra Modi and Home Minister Amit Shah are facing the nation's ire for masterminding and ensuring the passage of Citizenship Amendment Act (CAA) and proposing a nationwide National Register of Citizens (NRC), similar to Assam NRC. The ruling dispensation had least anticipated the unparalled protests, led by students, across the nation. Has the BJP hit an unprecedented hurdle with CAA? Its Twitter handle may provide some insights.

It may be recalled that Shah, during a Lok Sabha poll campaign in West Bengal's Darjeeling on April 11 this year, promised to remove every single infiltrator from the country by implementing a nationwide NRC. “We have promised in our manifesto that once Narendra Modi forms government once again, we will implement National Register of Citizens in the entire country... BJP will remove every single infiltrator from the country. All Buddhists and Hindu refugees will be identified and Indian nationality will be given to them," Shah had said. The BJP, too, had tweeted it from the party's official Twitter handle. Shah's remarks had then invited much criticism for fanning communal tensions.

However, it now appears that the party has silently deleted the tweet containing the controversial statement. While it is not clear when the tweet was removed from BJP's Twitter handle, it poses some questions in the current circumstances.

Why does the BJP want to keep a distance from Shah's controversial remarks? Is Shah's remarks coming in the way of BJP's damage control efforts in the wake of the protests?

Despite the nationwide protests, Shah has remained adamant on CAA implementation. On NRC, however, he took a mellowed down approach. “An exercise like NRC cannot be done in secrecy. We have not decided yet and these decisions cannot be taken by me alone. They need Cabinet approvals," he tried to assure at a recent event. However, any amount of assurances from the government that current citizens will not be affected by the implementation of CAA and NRC have done little to allay the fears of religious minorities in India who feel the laws would be used as tools to discriminate against them.

Various news reports have suggested that the government and the ruling party have hit a crucial roadblock in governance, coupled with decelerating economic growth. Back in 2014, Modi rode to power riding on the youth of the country. He sold the idea of 'vikas' and they annointed him as their leader. Five years later, Modi 2.0 has only assurances to provide and the youth in the country are seemingly angry and disappointed.

The fact that the Centre is yet to notifiy the Citizenship Amendment Act, clearly points to the fact that the BJP is unsure of its next move. It is yet to be seen how the government plans to execute its plans.