Kerala couple shows paralysis, old-age home no barrier to saying 'I do'

Kochaniyan was the assistant of Ammal's first husband, who was a renowned cook 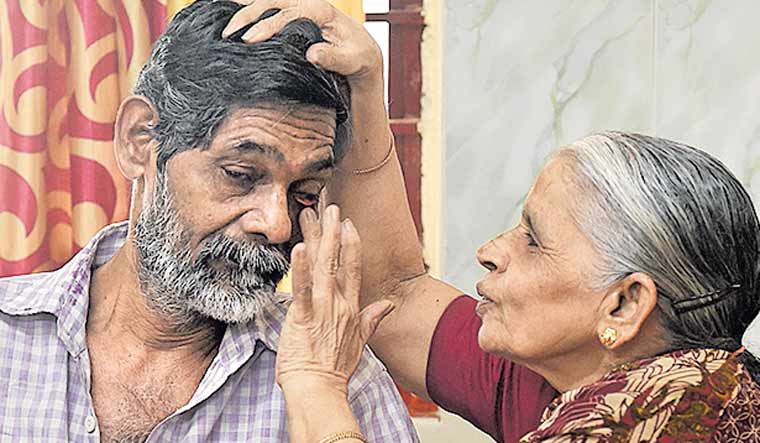 People looking for a spouse often have a checklist for themselves and their prospective partners. Two of the items on the checklists of nearly everyone is a house and good health. But true love can still bloom in the absence of these.

This story is like sweet payasam—love that lasts despite the passage of time. When 67-year-old Kochaniyan Menon ties the knot with 66-year-old P.V. Lakshmi Ammal, it is a tale of romantic sweetness that does not diminish with age. Both are residents of an old-age home.

Their wedding is on December 30. Lakshmi Ammal's first husband, G.K. Krishna Iyer, passed away 22 years ago. Iyer was one finest cooks of Brahmin cuisine in Thrissur. On his deathbed, Iyer told his assistant, Kochaniyan, “You should look after Ammal.” Iyer held her hand and gave it to Kochaniyan, who hails from Irinjalakkuda.

After her husband's death, Ammal moved to the Thrissur Corporation's old-age home at Ramavarmapuram. And Kochaniyan continued with cooking and catering work, travelling from place to place. Neither did the two profess their love for each other. One day at Guruvayur, Kochaniyan collapsed and became paralysed. A volunteer organisation in Wayanad took care of him. There, Kochaniyan spoke to the officials about his feelings for Ammal.

The organisation moved Kochaniyan to an old-age home at Thrissur run by the Department of Social Justice. By that time, Ammal, too, had come from the corporation's old-age home. When he was struggling to move his hands and legs, Ammal decided to support Kochaniyan. With medical treatment, Kochaniyan could partially recover his capacity to move his limbs.

The old-age home's management committee has decided to conduct their marriage. Incidentally, it will happen 50 years after Ammal's first marriage. “Mind cannot withhold love. He is not keeping good health,” she reasons.