Amid tussle over abrupt adjournment, Bengal governor to visit assembly on Thursday

Dhankhar said he has written to Speaker Biman Banerjee 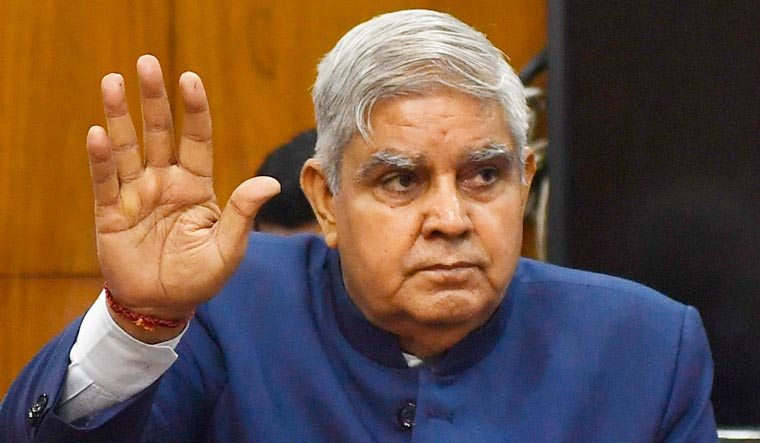 Amid a tussle with the ruling TMC over an abrupt two-day adjournment of the assembly, West Bengal Governor Jagdeep Dhankhar said that he will be visiting the House on Thursday.

The governor said on Wednesday that he has written to Speaker Biman Banerjee and will be going to the assembly to look into its facilities and also visit the library.

Earlier in the day, he took a swipe at the ruling dispensation, which blamed him for delaying clearance of pending bills leading to the adjournment, Dhankhar said he was following the Constitution and was not a "rubber stamp".

The rancour between the ruling party and the governor hit a new low after the speaker adjourned the House on Tuesday as bills slated to be placed in the assembly were yet to get his nod.

The claim was refuted by the Raj Bhavan, which in a statement termed the situation "factually untenable".

"As Governor I follow the script and tune of the Constitution and cannot blindly take a call. I am neither a rubber-stamp nor a post office," Dhankhar said in a tweet.

"I am obligated to scrutinise the bills in the light of the Constitution and act without delay. Concerned at delay by government on this," he added.

The Trinamool Congress slammed Dhankhar and said the governor was acting like an "opposition party".

The House will remain adjourned till December 5 and the Winter Session will resume on December 6 at 11 am, it was announced.

The bills which were scheduled to be placed won't be tabled as they are yet to receive the nod of the governor, the speaker had said in the Assembly.

"We had sent those bills for printing but can't place them in the Assembly as they are yet to get the nod," he had said.

Since assuming charge in July, the governor has been at loggerheards with Mamata Banerjee's government over a number of issues -- ranging from seating arrangement at the Durga Puja carnival to his unscheduled visit to Singur.

Further, none of the senior state officials attended the meetings convened by the governor during his visit to North and South 24 Parganas districts.