In rare move, Bengal speaker adjourns assembly for two days as bills yet to get governor's nod

The House will remain adjourned till December 5 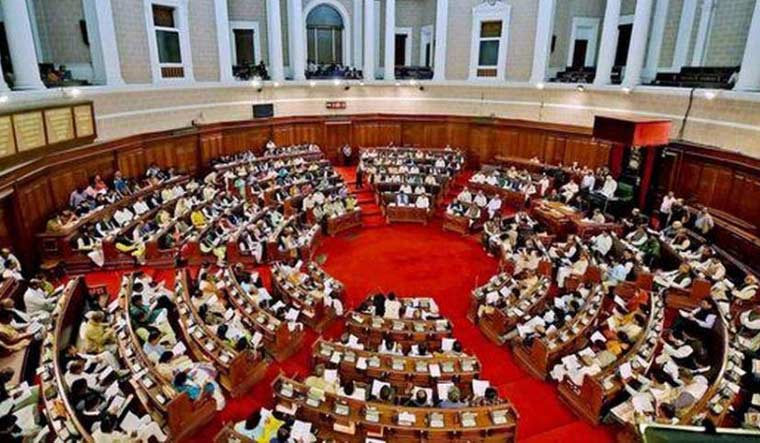 In an unprecedented development, West Bengal Speaker Biman Banerjee Tuesday adjourned the House for two days as bills slated to be placed in the assembly are yet to get the nod of Governor Jagdeep Dhankhar.

The House will remain adjourned till December 5, Banerjee said in the Assembly.

The House will again start the session from December 6 at 11 am, he said.

"The House will be adjourned for two days. The bills which were scheduled to be placed won't be tabled as they are yet to receive the nod of the governor.

"We had sent those bills for printing but can't place them in the Assembly as they are yet to get the nod," Banerjee said.

West Bengal Governor Jagdeep Dhankhar is at loggerheads with the TMC government on a number of issues.

Last week he had hit out at Chief Minister Mamata Banerjee for "humiliating" him "on every occasion" and not briefing him regularly.

The Raj Bhavan has issued a statement saying there has been no delay in handling the legislative work. Full text of the statement is here:

It has been gathered from media projections that the West Bengal State Legislative Assembly has come to be adjourned for two days as the Bills which were scheduled to be placed could not receive the ‘nod of the Governor’  according to the Speaker of the WBLA Shri Biman Banerjee.

The situation projected is factually untenable.  There has been no delay in handling the legislative work in the Raj Bhavan.  Highest priority is accorded.  However, all issues are thoroughly gone into after due briefing from the Department.

There is no delay whatsoever at the end of the Hon’ble Governor in dealing with Legislative work and if issues there on are pending, it is on account of lack of input or response from the concerned in the respective Departments.

As regard the West Bengal (Prevention of Lynching) Bill, 2019: a joint representation in this regard was made by the Congress Legislative Party and Left Front Legislative Party, West Bengal, through the Leader of the Opposition Shri Abdul Mannan and Dr. Sujan Chakraborty.  In process thereof, the matter came to be scrutinised in accordance of Constitutional provisions and on 29 November, 2019 WB Legislative Assembly Secretariat vide No. 1461-LA/LEG dated 29.11.2019 indicated to the office of the Governor that the preparation of the final proceedings of the House dated 30 August 2019 in connection with the West Bengal (Prevention of Lynching Bill) 2019 is under process.  It was further indicated that the complete official report of the debates on the aforesaid Bill will be forwarded as soon as it is finalized.   The proceedings of the Assembly are critical for addressing the issue raised in the joint memorandum.

The matter received attention of the Governor on Dec 1, 2019 as 30 November was a Holiday.  The Governor indicated “put up after the response as indicated as regards final proceedings is available.”

The entire delay is fully attributable to the Assembly not making the proceedings available.

The West Bengal State Commission for the Scheduled Castes and Scheduled Tribes Bill, 2019 was received at Raj Bhavan on 29.11.2019 and on 3.12.2019 the Governor had indicated that concerned senior person may brief along with the SC & ST Prevention of Atrocities Act.  A follow up communication was sent on the same day to the Secretary to the West Bengal Backward Classes Welfare Department vide No. 4946-S dated 3.12.19.  It deserves to be noted that the file from the State Govt in this regard came to Raj Bhavan only on 29.11.2019.  There has been no delay as after 29.11.2019, November 30 and December 1 were Saturday and Sunday.

As regards West Bengal Lifts, Escalators and Travelators Bill, 2019 a communication was sent from Raj Bhavan on 26.11.2019 to the Additional Secretary to the Govt of West Bengal, Power Deptt, indicating that the Additional Chief Secretary may brief the Governor on this Bill.  There has been no response thereto so far.

As regards The Hindi University, West Bengal, Bill 2019, on 3.12.2019 a communication  was sent to the concerned Principal Secretary of the Deptt to brief the Governor on the issue.

There has thus been no let up whatsoever at the end of the Governor.  The delay is occasioned due to response not forthcoming from the Government.