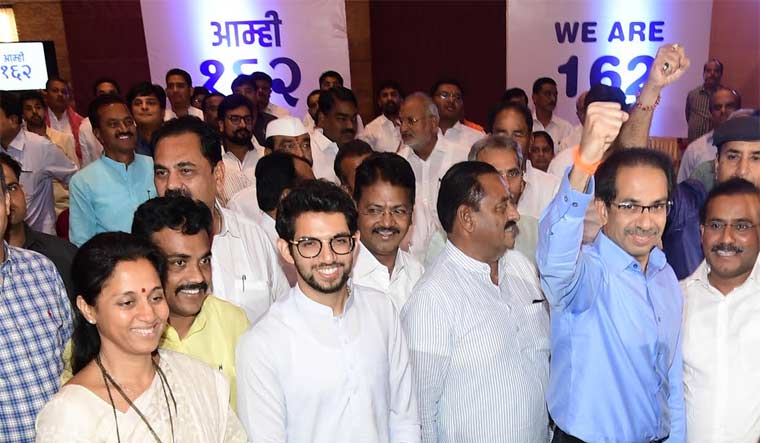 On Saturday, shortly after the early-morning swearing-in of Devendra Fadnavis as Maharashtra chief minister dominated headlines on November 24, Shiv Sena chief Uddhav Thackeray held a joint press conference with Sharad Pawar. At the press conference, Thackeray warned the BJP of 'consequences' if the party attempted to break the Shiv Sena.

Long-term residents of Mumbai and keen political observers of Maharashtra politics would know what was the basis for Uddhav Thackeray's warning: The loyalty of the Shiv Sena's cadre base, who have had a reputation of never shying away from a scrap.

After Fadnavis returned to office, a senior BJP leader claimed the BJP had the support of over 170 MLAs in the 288-member Assembly, raising fears of poaching in the opposition.

According to media reports, the Bharatiya Kamgar Sena, the trade union arm of the Shiv Sena, played a key role in ensuring security for the MLAs of the Congress, Shiv Sena and NCP ever since the three parties launched negotiations to come together.

The Kamgar Sena is believed to have considerable influence in nearly all five-star hotels in Mumbai, including the Grand Hyatt, Hotel Sofitel and Renaissance, all places where the three parties sent MLAs to safeguard against poaching. According to the Times of India, Kamgar Sena activists were keeping vigil even as the Shiv Sena shifted legislators from the Hotel Lalit to Lemon Tree on Monday.

The dozen-or-so NCP MLAs who accompanied NCP leader Ajit Pawar to his swearing-in on November 23 were kept at the Hotel Sofitel. According to the Times of India, staff at the hotel took "attendance" calls and checked on these legislators every two hours.

The three parties were even getting information from the Kamgar Sena about "unusual movements".

On Sunday, Shiv Sena leaders Eknath Shinde and Milind Narvekar managed to 'catch' NCP MLA Sanjay Bansode at a hotel near the Mumbai Airport as he was allegedly set to fly out of the city. According to the Mumbai Mirror, the police and a BJP functionary were present at the hotel where Bansode was, but they soon backed off after Shinde and Narvekar arrived with supporters.

Bansode was dutifully taken to a hotel where Shiv Sena MLAs were present and made to talk to NCP supremo Sharad Pawar.

It was not just hotels where the Shiv Sena's loyal cadre were present. According to media reports, the Shiv Sena had tasked its union activists at the Mumbai Airport to monitor passenger manifests to ascertain whether any MLAs were planning to leave Mumbai.

Last week, Shiv Sena MLA Abdul Sattar warned the BJP against attempting to poach MLAs from his party. Sattar was quoted by ANI as saying, "Our party is not some retail shop to buy MLAs from. If anybody tries to poach our MLAs, we will smash his head and break his legs too. However, the Sena will also summon an ambulance for the person and arrange for his medical treatment.”