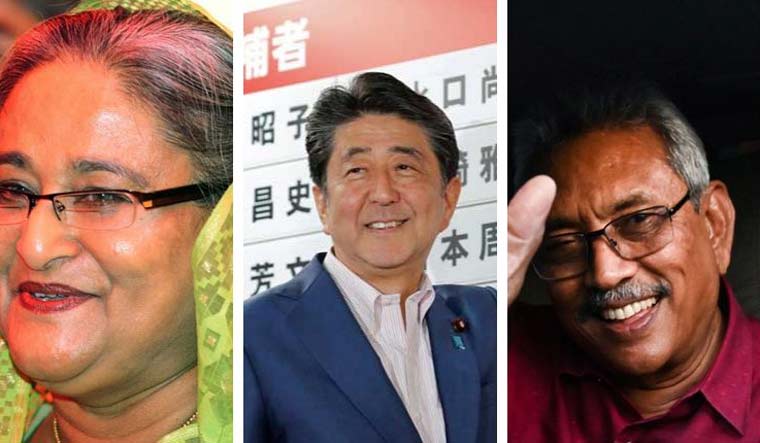 There is going to be a flurry of VIP visits to India over the next few days, each with a different focus but all of them equally important to India's foreign policy.

Bangladesh Prime Minister Sheikh Hasina will visit Kolkata on Friday at the invitation of Prime minister Narandra Modi to inaugurate the first Day/Night Test between India and Bangladesh. Modi felt that given the importance of the match,—the Day/Night Test game is set to mark a new beginning for the traditional format—it should be inaugurated by PM Hasina.

While India's ties with Bangladesh are robust at present given the rapport the Centre enjoys with the Hasina-led government, another visit that India is gearing up for is about testing waters with a new political dispensation in the neighbourhood. Newly-elected Sri Lankan president Gotabaya Rajapaksa will visit India on his first overseas tour after taking charge. He will reach New Delhi on November 29. It is usually a matter of convention that elected heads of government and even new heads of state in India's immediate neighbourhood make their first official foreign sojourn to New Delhi. Rajapaksa is known to be China-leaning and given the investments that India has made in the island country over the last few years, establishing good ties with this new dispensation without delay is crucial. Within days of the election result, External Affairs Minister S. Jaishankar visited Colombo (November 19-20) to meet Rajapaksa.

At a briefing on Thursday, ministry of external affairs spokesperson Raveesh Kumar emphasised that India's relationship with any neighbouring nation was independent of relations with a third country. He said the external affairs minister had gone as a special envoy of the prime minister to Colombo and had conveyed to Rajapaksa India's expectation that the Sri Lankan government will take forward the process of national reconciliation to arrive at a solution that meets the aspirations of the Tamil community for equality, justice, peace and dignity.

Kumar noted that Rajapaksa has said he will be president of all Sri Lankans irrespective of their racial or religious identity and without creating a distinction on whether they voted for him or not.

India has focused on Sri Lanka for its development outreach to the neighbourhood and one of its biggest projects is the construction of around 60,000 houses as part of post conflict rehabilitation. India also handed over a fleet of ambulances to Sri Lanka, and is planning to develop part of Colombo port in partnership with Japan. India has also worked heavily on capacity building in Sri Lanka.

Japanese Prime Minister Shinzo Abe is scheduled to visit India for the India-Japan summit, an established mechanism between the two countries. The dates and venue of the summit are yet to be announced, but ahead of the summit, India will host the first Indo-Japan 2+2 meet of defence and foreign ministers later this month. India started the 2+2 dialogue format with the US and the fist meet was held in India in September 2018. Both Japan and the US are part of the Quad.