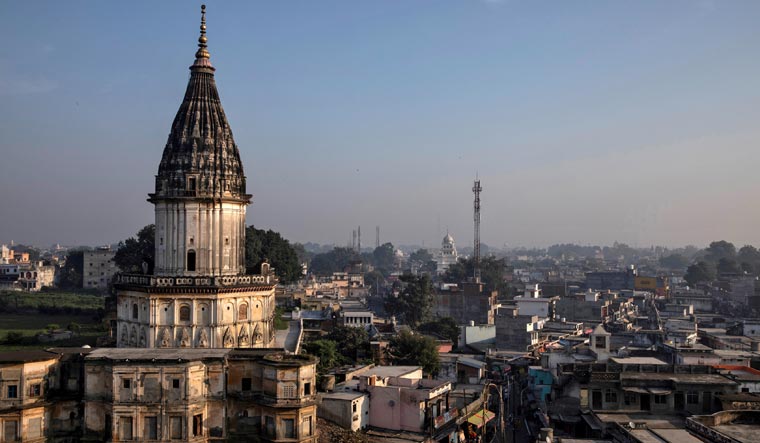 The much-anticipated verdict of the Supreme Court on the disputed Babri Masjid-Ram Janmabhoomi site at Ayodhya on Saturday has its genesis in a judgment delivered nine years.

The three-justice bench of the Allahabad High Court—consisting of justices S.U. Khan, Sudhir Agarwal and Dharam Veer Sharma—had ordered that the disputed site at Ayodhya, spanning 2.77 acres, be divided equally between the petitioners. The petitioners were the Nirmohi Akhara, Muslim organisations and Hindu groups backed by the VHP, that wanted to build a Ram temple.

The Allahabad High Court ordered that the area of the disputed site before the central dome of the Babri Masjid, where a makeshift idol of Ram was kept, be given to the Hindu parties. This was done on the grounds that Hindus believed the location was the birthplace of Ram.

The Nirmohi Akhara was allocated the area in the outer courtyard, while Muslim parties were to be given the remaining areas in the inner and outer courtyards.

The Allahabad High Court ordered that all the parties were to allow entry and exit rights to each other. The Allahabad High Court judgment also had the provision for making minor adjustments in the allocations, which could be compensated by allocating the adjoining land that was taken over by the Centre following the demolition of the Babri Masjid.

Interestingly, the Allahabad High Court judgment also discussed key questions such as the pre-existence of a Hindu temple at the site and when exactly the Babri Masjid was built. Justices Agarwal and Sharma quoted ASI reports to state that the Babri Masjid was constructed after "demolition of a non-Islamic religious structure, i.e., a Hindu temple". Justice Khan, on the other hand, had opined "No temple was demolished for constructing the mosque. Mosque was constructed over the ruins of temples, which were lying in utter ruins since a very long time before the construction of mosque.”

Justice Agarwal also was not convinced the Babri Masjid was built on orders of Emperor Babar. Justices Khan and Sharma concurred that that mosque was constructed on orders of Babar. However, justice Sharma was of the view the Babri Masjid was "built against the tenets of Islam" and "thus, it cannot have the character of a mosque" and also "it is established that the disputed structure cannot be treated as a mosque as it came into existence against the tenets of Islam."