Cyclone 'Maha' is likely to hit Gujarat coast on Thursday 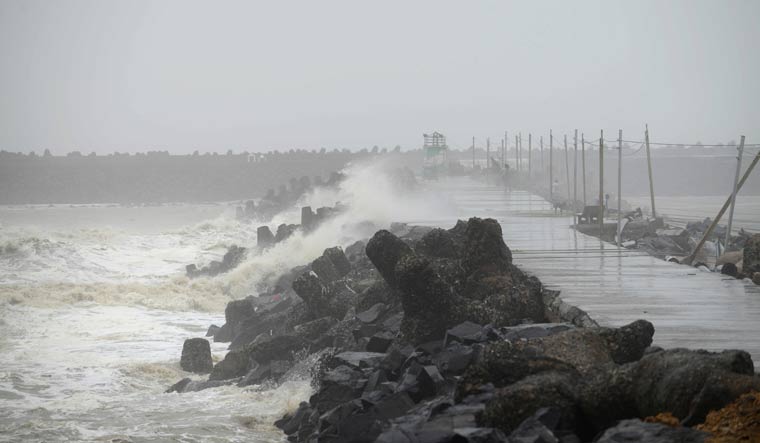 Air pollution may be strengthening cyclones in the Arabian Sea, climate scientists and experts have said while expressing concern that it could become a regular feature in the coming years if emissions are not controlled.

The viewpoint comes in the backdrop of warning of cyclone 'Maha' which was likely to hit Gujarat coast early November 7. However, later the India Meteorological Department (IMD) stated that it will fizzle out and is likely to skirt the Saurashtra coast.

Scientists believe that air pollution, caused by human activities, may be strengthening cyclones in the Arabian Sea because air pollution weakens the forces that can otherwise prevent cyclones from forming.

Amato Evan, an Associate Professor of Climate, Atmospheric Science and Physical Oceanography at University of California, said air pollution could be reducing the vertical wind shear which may be increasing intensity of tropical cyclones.

"Air pollution over the region may be increasing the strength of tropical cyclones in the Arabian Sea by reducing the vertical wind shear. Our research found this to be the case for pre-monsoon storms, and we speculated that this also could be true in the post-monsoon season as well. Given the current and alarming amount of pollution the area is currently experiencing, it may be time to revisit this hypothesis," Evan said.

Speaking to PTI, Anjal Prakash, an Associate Professor at TERI-School of Advanced Studies, said the warmer the world is, more cyclonic events will occur.

"When there is more carbon in atmosphere, oceans become warmer. We already have global warming of 1 degree celsius. There will be much more severe cyclonic events because of it. The problem is that climate is highly unpredictable," said Prakash, who was also the coordinating lead author of the IPCC's Special Report on Ocean and Cryosphere.

Sharing a similar view, another scientist said that with a rapidly warming Indian Ocean, these severe cyclones are projected to increase in number.

"...and we cannot neglect the possibility of these cyclones making landfall over the west coast of India," said Roxy Koll Mathew, climate scientist from Indian Institute of Tropical Meteorology (IITM), Pune.

Referring to the IPCC Special Report on Ocean and Cryosphere, Mathew said the probability of post-monsoon tropical cyclones over the Arabian Sea has increased.

"The IPCC Special Report on Ocean and Cryosphere shows that the probability of post-monsoon tropical cyclones over the Arabian Sea has increased. This...largely link to rising ocean temperatures. Since tropical cyclones primarily draw their energy from evaporation at the ocean surface, the surface temperature and ocean heat content has a strong control on the cyclone intensity," Mathew said.

Prakash, however, said that India's lack of preparedness to deal with such climatic events was more worrisome than the events alone.

"We are not prepared to tackle such events so frequently that is worrisome. It is going to be a new normal in future, that is a cause of concern and we need to have climate resilient infrastructure. We are not prepared well," Prakash said.

A major storm, Cyclone Maha, was forecast to cross the Gujarat coast around midnight on Wednesday with wind speeds of 100-110kph.

At present, 'Maha' is still a 'severe cyclonic storm' hovering over the east-central Arabian sea, and is located around 400 km from coastal Porbandar in Saurashtra region of Gujarat.

The earlier prediction was that 'Maha' would make a landfall on the Gujarat coast near the Union Territory of Diu on Thursday morning as a cyclonic storm had prompted the authorities to step up preparedness.