Replug: Did the nation forget events that occurred in Ayodhya 10 years ago?

The nation had almost forgotten the issue; politicians were having second thoughts 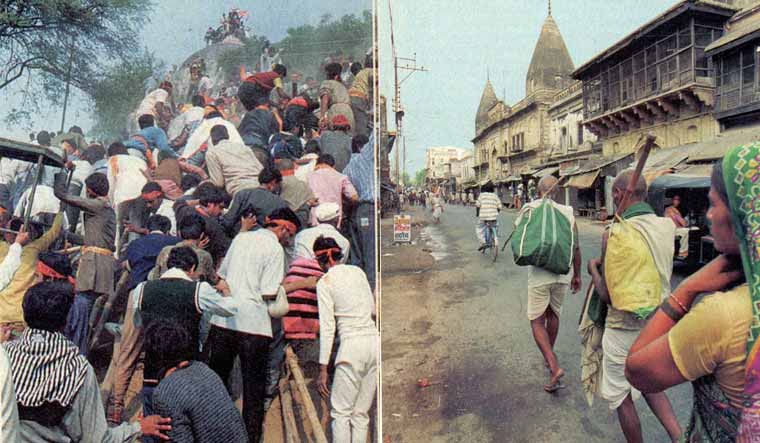 L-R: Kar sevaks clambering up the mousque on Dec 6, 1992 | Ravinder Reddy; A pilgrim's progress | B Jayachandran

This story originally appeared in THE WEEK issue dated December 8, 2002

No one who witnessed the cataclysmic events of December 6,1992, at Ayodhya can ever forget them. The nation, amazingly, has.

When frenzied mobs of kar sevaks, in blatant violation of the law, brought down Babri Masjid, while scores of companies of security forces passively watched, it appeared that the secular Indian polity was finished. For over 48 hours, anarchy prevailed in the temple town, as the town's handful of Muslims were forced to flee, deadly communal riots broke out all over the country, and it seemed certain that a new, fascist dawn was on the horizon; the barbarians had stormed the gate. But ten years have gone by, and nothing of that sort has happened.


The 'makeshift temple', with the idol of Ram, put up on the spot, still remains untouched. No grand Ram temple has been erected there; nor is one likely to be, in the near future. The court's order of status quo, reaffirmed in October 1994, and again in March this year, continues to be respected. The BJP, which then backed the kar sevaks unreservedly, and reaped enormous electoral benefit from the Ayodhya upsurge, is today forced to defend the court order, and restrain the Vishwa Hindu Parishad (VHP) from any attempt at construction.


Ten years down the line, BJP leaders appear positively embarrassed by the demolition. There is broad agreement within the party that it would have reaped greater dividends if the structure had remained. "Most unfortunate," Deputy Prime Minister Lal Krishna Advani has repeatedly characterised the events of December 6, and his description is echoed by all. "It was most unfortunate," said Mukhtar Abbas Naqvi, BJP general secretary and MP. "But still more unfortunate is the way the opposition continues to try to make political capital out of it."


Indeed, it is only the opposition parties, which, by bringing Parliament, to a halt on every December 6, try to remind the nation of an event it has otherwise put behind itself.


There is complete agreement in BJP circles that, electorally, the Ayodhya issue died on that fateful day. The official party position of course is that Ayodhya was never an electoral consideration; the party backed the agitation only because it was 'a matter of faith' for Hindus. But BJP leaders, while admitting that Ayodhya— particularly after Advani's 1990 rath yatra—was primarily responsible for their party's great leap forward, have since given up on it. "I have always held that any issue, however potent, is good for only one election," maintained a party vice-president. "The Ayodhya issue helped us in the 1991 Lok Sabha and Uttar Pradesh assembly polls, not after that." (It enabled the BJP to increase its Lok Sabha tally from 86 to 119, and set a clear majority in Uttar Pradesh.)

But after that, Ayodhya has done the party no good. Within a year of the demolition, the BJP lost the assembly elections in three north Indian states. Exactly a year after Babri Masjid came down, on December 6,1993, the most strident opponent of the agitation, Mulayam Singh Yadav, was sworn in as chief minister of Uttar Pradesh. Ayodhya was not an issue in several elections that followed, but when the VHP sought to revive it just before the assembly elections in Uttar Pradesh in March this year, the BJP again came a cropper. It finished third, behind the Samajwadi Party (SP) and the Bahujan Samaj Party (BSP) with just 88 of the assembly's 403 seats.

"The Godhra incident and the Gujarat riots gave the VHP's Ayodhya programme in March more attention than it would have otherwise got," observed the BJP vice-president. "It created a false impression that Ayodhya can still be an issue. Some kar sevaks may have come into Ayodhya from outside, but unlike in the earlier phase, the local population remained indifferent." Uttar Pradesh BJP leaders are convinced that even without the VHP's intervention, they would have won just as many seats, if not more. "The government was put in an embarrassing position," observed an MP. "We may have lost some hardcore Hindu votes instead of gaining any."


Thus the pusillanimity in the BJP government's dealings with the VHP: BJP leaders fear losing a few votes if they take on the temple builders. They do not expect to gain any by backing them. And even the VHP seems to be belatedly waking up: in its Gujarat programmes, for instance, it has stuck to local issues, hardly ever raking up Ayodhya.


Leaving the issue behind has also meant allowing the perpetrators of the outrage to get away scotfree. The hundreds who climbed the domes and brought the structure down using shovels and pickaxes remain anonymous even after a decade. Although chargesheets were filed against unnamed kar sevaks after the demolition, no sustained effort was made to track them down or book them. A CBI investigation went on for years before being buried.


The effort to pinpoint the worthies who egged on the kar sevaks with their provocative speeches is still being doggedly pursued by the M.S. Liberhan Commission of Inquiry. Set up on December 17, 1992, it initially faced much difficulty in getting the high profile participants in the drama—chiefly leaders of the BJP and the RSS—to depose. But in the last two years most of them have finally put in an appearance at the Commission hearings: Lal Krishna Advani, Murli Manohar Joshi, Uma Bharati, H.V. Seshadri, K.S. Sudarshan. Even the then Prime Minister P.V. Narasimha Rao provided lengthy reasons to justify his amazing inaction on that fateful day.


BJP and RSS leaders agree that the Ayodhya agitation led to a worsening of relations between Hindus and Muslims. "I blame it on the way the so-called secularists projected the issue," said Naqvi. "It was these political parties and pseudo-intellectuals who poisoned the atmosphere."


"The Ayodhya developments were an expression of Hindu frustration," echoed Seshadri Chari, editor of the RSS-run Organiser. "For too long, Hindus had remained mute while political parties pandered to unreasonable demands from the minorities. So when Hindus too began to assert themselves, the relationship was affected."


The primary gain of the Ayodhya movement, BJP and RSS sources concurred, had been Hindu self-awareness. "In 1947, and the decades that followed, when Nehruvian ideology held full sway, no one was willing to listen to those who spoke of Hindu rights. That situation has now changed, thanks to Ayodhya," said Chari.


But ten years after December 1992, the Ayodhya tangle is no closer to a solution than it was then. The standard position of all political parties, including the BJP, is that it should be settled in court, or through agreement between representatives of Hindus and Muslims. As political leaders privately agree, both paths are culs-de-sac. "The courts will never be able to solve the issue," maintained Chari.


The original suits on behalf of Hindus were filed in the Faizabad district court in 1950, with the Sunni Waqf Board entering the fray on behalf of Muslims in 1961; they were all bunched together and transferred to the Lucknow bench of the Allahabad High Court in 1989.


Fifty years after the first suits were filed, scores of witnesses still remain to be examined. Indeed, subsequent developments have complicated the legal issues further, so that recent court hearings and judgements have all related to peripheral matters, without touching upon the title suit itself. Should the disputed territory comprise only the space occupied by the demolished structure—a mere 60 by 40 feet—or the disputed area around it as well (a total of 2.77 acres), or indeed the entire 67. 7 acres acquired by the central government after the structure was razed? "It is difficult to understand, let alone resolve," quipped a BJP leader.


Equally, interactions between Hindu and Muslim representatives— primarily the VHP and the Babri Masjid Action Committee at first, and later the All India Muslim Personal Law Board—have been futile. Numerous intermediaries—including, most recently, the Shankaracharya of Kanchi—have tried to work out a settlement, but in vain. "It is not possible to have a solution which does equal justice to Hindus and Muslims," said Chari.


But couldn't leaving the matter well alone, simply maintaining the status quo indefinitely, be yet another solution? RSS and VHP leaders obviously did not agree. "Ayodhya will remain a festering sore as long as the problem is not sorted out," said Rai. But saner elements noted that the Ayodhya issue had lost its potency precisely because nothing was done about it after December 1992. As P.V. Narasimha Rao, prime minister when Babri Masjid fell, is said to have once observed: "Sometimes not taking a decision is the best decision."