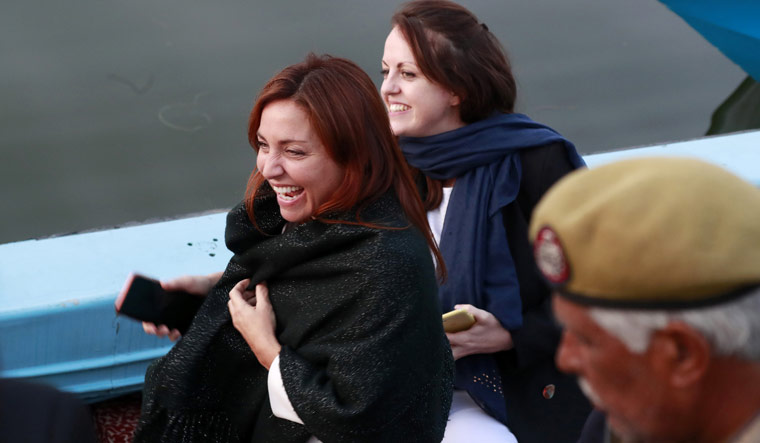 The Indian media has gone into overdrive covering the visit of a group of Members of the European Parliament (MEPs) to Jammu and Kashmir, on Tuesday. From being first projected as a EU “delegation” to then being revealed to be an “unofficial” visit by the MEPs, the first visit to Kashmir by foreign lawmakers since the abrogation of Article 370 has generated much controversy.

And at the centre of the controversy are an Indian-origin businesswoman and a company head-quartered in New Delhi. While Madi Sharma has cornered many headlines for being the 'organiser' of the MEPs' visit, the role of the Srivastava Group, which sponsored the trip, is also being scrutinised.

The Srivastava Group founded the International Institute for Non-aligned Studies (IINS), the Delhi-based think tank, that is sponsored the visit of the MEPs. On its website, Srivastava Group describes itself as being “among the fastest growing business houses in the country with interests in natural resources, clean energy, airspace, consulting services, healthcare, print media and publishing”.

Both the Srivastava Group and IINS share a common address: A-2/59, Safdarjung Enclave, Delhi.

Weeks before the visit of the MEPs to India, an organisation that fights cyber disinformation against the European Union alleged that a news organisation based in Brussels had links to the Srivastava Group. In a post on its website, the EUDisinfoLab scrutinised the work of Brussels-based EP Today, which describes itself as the "monthly news magazine for the European Parliament".

Hats off to @EUvsDisinfo for their exposé on the @EPToday website, which was featured in @PoliticoEUROPE’s Brussels Playbook this morning @florianederhttps://t.co/krkFHTE1BJ

EUDisinfoLab claimed EP Today had extensively used syndicated content from Russia Today and Voice of America. Russia Today has been called out repeatedly by EU regulators as being a source of disinformation used by Russia.

EUDisinfoLab noted the Facebook page of EP Today was managed by administrators in India. Further, Twitter statistics showed EP Today content had been popular in both India and Belgium. EUDisinfoLab noted that "It is interesting to note that Srivastava Group is located at Square de Meus in Brussels, which is close to the European Parliament. And it seems as though they share the same office address as EP Today." EUDisinfoLab also found that the Srivastava Group and EP Today had used the same servers and official registration email.

Interestingly, EUDisinfoLab's work on EP Today was inspired by an investigation by EUvsDisinfo—a project of the European Union's External Action Service. The EUvsDisinfo project was started in 2015 to "better forecast, address and respond to the Russian Federation’s ongoing disinformation campaigns affecting the European Union". EUvsDisinfo noted that since October 24, 2018, "47 per cent of the articles (on EP Today) are word-for-word copies of articles" from Russia Today. It described EP Today as a "lobbying platform, presented as a serious news outlet, whose target audience are EU decision makers".

Soon after the findings about the work on EP Today by EUDisinfoLab and EuvsDisinfo, the European edition of Politico reported on October 17 “Pakistani officials had long shared their misgivings about the website, given the volume of stories the website put out that criticised the country”.

Interestingly, on October 16, following the research by EUDisinfoLab and EUvsDisinfo, EP today apologised to its readers on use of Russia Today articles. EP Today stated "This practice has now ceased and will not be taken up in the future."