Tiwari had made objectionable remarks against the Prophet Mohammad in 2015 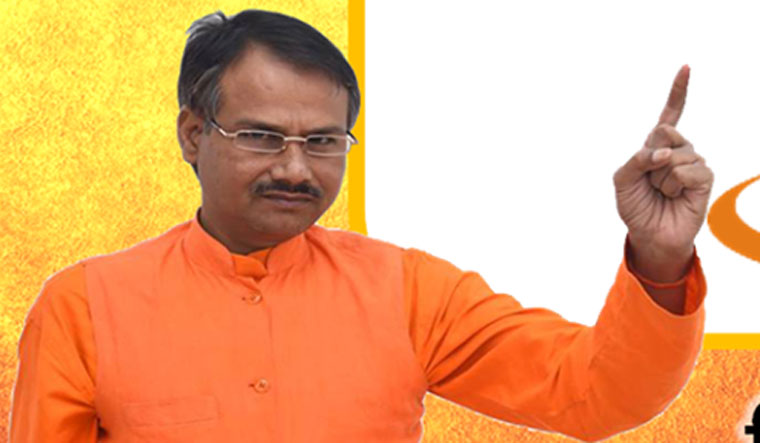 Kamlesh Tiwari, an outspoken and hardline Hindu leader, died after being shot and stabbed at his residence in Lucknow on Friday morning. Tiwari was the former regional head of the Hindu Mahasabha. Over the past year-and-half, Tiwari had been heading a political outfit called the Hindu Samaj Party that he had founded.

According to eyewitness accounts, two men entered Tiwari’s office to give him sweets. They had called the leader before coming to his residence-cum-office. The attackers also had tea with Tiwari before attacking him. They were carrying a gun and knife in the sweetmeat box they had with them. Tiwari was stabbed and then shot in the neck. He was rushed to the trauma centre of KGMU, where he was declared dead.

The incident took place in the Naka area of Lucknow. Angry members of the Hindu Samaj Party forced staff of shops near Tiwari’s house to down their shutters.

No arrests have been made so far.

Kalanidhi Naithani, the SSP of Lucknow, said, “Many teams have been formed. Details of the call records are being examined. It appears that he knew the attackers.”

Saurashtra Singh, the household help of Tiwari, said that one of the attackers was wearing saffron clothes. Singh had been sent out to get paan masala when the attack happened. Tiwari had two armed security guards, one of whom was on leave and the other was sleeping on the ground floor when the attack took place on the first floor of Tiwari’s two-storey home.

Tiwari, a staunch supporter of the Ram Mandir movement, was known for his controversial statements. He had announced construction of a temple dedicated to Nathuram Godse on his land in Sitapur, a district neighbouring Lucknow. Tiwari also represented the Hindu Mahasabha for some time as a litigant in the Ayodhya case. On Independence Day in 2018, Tiwari and some other Hindutva activists were arrested for attempting to enter the disputed Ram Janmabhoomi-Babri Masjid site in Ayodhya.

Tiwari had made objectionable remarks against the Prophet Mohammad in 2015 after which angry Muslims had called for his head. Tiwari had also been booked under the National Security Act. His party, known for its rabble-rousing ways, has as its slogan Hindutva hamari shaan hai, bhagwa hamari aan hai (Hindutva and saffron is our pride).

Tiwari’s murder coming two days after the conclusion of the arguments in the Ayodhya case is being seen by some as deliberate and well-planned.