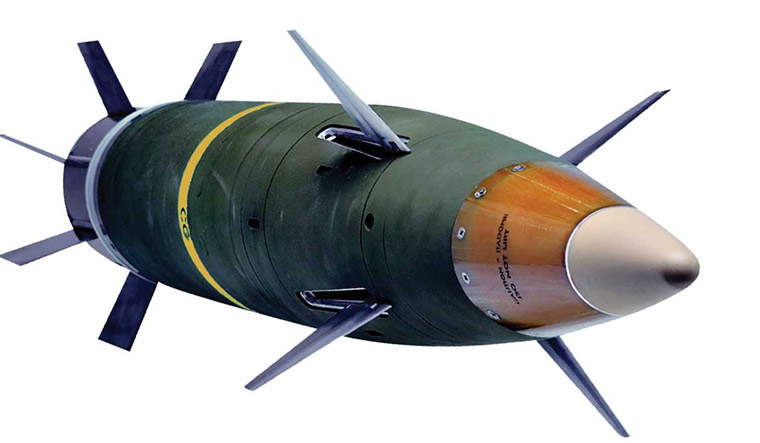 The Excalibur shell | US Army

The Indian Army on Wednesday held a conference of its key commanders in Delhi. One interesting snippet of information that emerged from the meeting was the arrival of the Excalibur artillery shell from the US.

PTI reported, “Recently, 155MM Excalibur artillery ammunition from US has arrived which can be fired at extended ranges...”.

The Excalibur is a artillery shell that uses satellite guidance and can be fired from 155mm howitzers. The Excalibur shell is considered far more accurate than unguided shells that are fired from howitzers, with the GPS guidance allowing it hit targets with significantly higher accuracy. The US Army's fact-sheet for the Excalibur claims it has achieved “precision” of “less than 2 meters miss distance”, meaning the shell can fall within 2 metres of its intended target.

In addition, the Excalibur shell is equipped with guidance 'fins' that extend its range. The Excalibur can fired at a distance of over 50km.

The Excalibur is being manufactured by US company Raytheon and MNC BAE Systems. The first Excalibur shell was delivered to the US Army and Marines early after the start of the new millennium and has been used in combat in Afghanistan and Iraq. The Excalibur has been sold to Canada, Australia and Sweden. In the Indian Army, the Excalibur is expected to be used on the M777 towed howitzers that have been inducted. India had signed a contract valued at Rs 5,070 crore to buy 145 M777 howtizers.

Interestingly, the Excalibur is not the first 'smart' artillery shell the Indian Army is buying. The Indian Army purchased approximately 3,000 Krasnopol laser-guided shells from Russia between 1999 to 2002. The Krasnopol shells were purchased at a cost of nearly $112 million.

The Krasnopol, which homes in on a laser beam, was meant to be fired from the 155mm Bofors guns. In 2007, then defence minister A.K. Antony informed Parliament the performance of the Krasnopol had "deteriorated over the years" and had not performed to "desired standards" in high-altitude areas.

The Excalibur may not just see service with the Indian Army. Raytheon and the US Navy are testing the 'N5' variant of the Excalibur, which can be fired from 127mm guns found on warships of Western navies. The N5 can be fired at a range of up to 40km and would be capable of hitting targets on land. The Indian Navy signed an agreement with BAE Systems in 2018 to buy 13 127mm guns from BAE Systems.