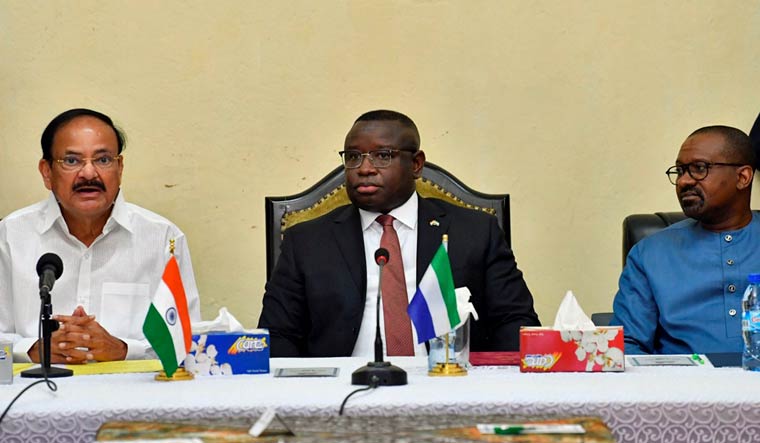 The vice president arrived in Freetown on Saturday, as part of his two-nation visit to Comoros and Sierra Leone from October 10 to 14.

He was received at the airport by Vice President of the Republic of Sierra Leone Mohamed Juldeh Jalloh, High Commissioner of India to Ghana, Sierra Leone and Togo Birender Singh Yadav.

After holding delegation level talks on Sunday, Naidu and Bio addressed the media at the State House here.

"We congratulate Sierra Leone on consolidation of democracy as evident by conduct of five peaceful elections and three smooth transfers of power. I am confident that under his (Bio) leadership, Sierra Leone will tread the path of growth and development. I am also hopeful that our relations will grow and intensify in the coming years," Naidu said.

The vice president said the United Nations needs to be reformed to reflect the realities of today.

He said, "We agreed that both sides need to continue pushing for these reforms so that one-third of mankind residing in Africa and India occupy their rightful place at the high table in decision making bodies of the United Nations."

The vice president said India has already extended credit line of USD 217.5 million to Sierra Leone and on top of that credit of USD 30 million was extended in this visit for rice cultivation in Tomabum.

Further, the African nation has been extended credit for a new presidential office complex in Freetown and a potable water project.

India will soon initiate steps to set up the Centre of Excellence in IT in Sierra Leone, according to a statement from the Ministry of External Affairs.

India will also be dispatching 1,000 MTs of rice to Sierra Leone, as a goodwill gesture, in the coming months, the statement added.

Sierra Leone will joining the International Solar Alliance, which has been initiated by India.

India has extended e-Visa facility to Sierra Leone nationals for ease of mobility and both sides are also negotiating a visa waiver agreement for holders of diplomatic and official passport holders.

During his visit to Comoros, Naidu held wide ranging talks with President of Comoros Azali Assoumani. The two countries signed six agreements, including one on defence cooperation.

Naidu was also conferred with 'The Order of the Green Crescent', the highest Civilian Honour of Comoros, by President Assoumani