Mehbooba refused to sign bond for release from detention: Daughter 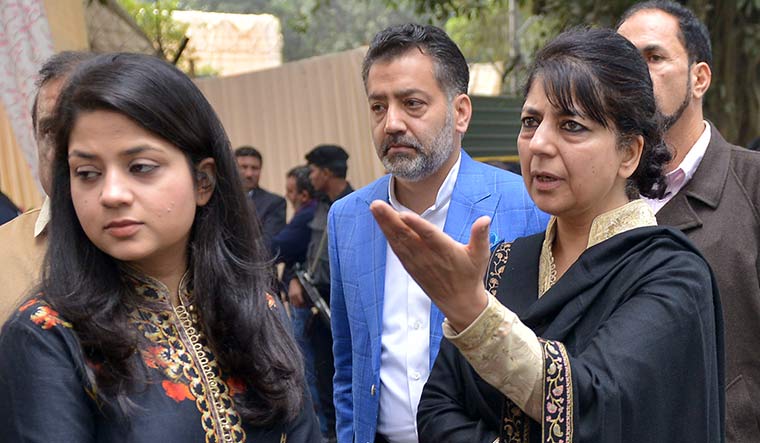 Iltija Mufti, the daughter of detained PDP chief Mehbooba Mufti, on Thursday declared politicians being released by the government were being forced to sign bonds. Iltija claimed “many”, including Mehbooba, had “categorically” refused to sign these bonds.

Reports say detainees released today were forced to sign bonds.Under what law is their release conditional as their detention was illegal itself? Many including Ms Mufti have categorically refused to sign these bonds. The govt with its rudderless approach is tying itself in knots

Mehbooba was among a number of senior political leaders who were detained by the government shortly before Home Minister Amit Shah announced on August 5 that provisions of Article 370 were being abrogated. Since September, Iltija has been acting as a de facto spokesperson for Mehbooba and has been operating her Twitter handle.

Iltija was referring to the release of three politicians in Jammu and Kashmir from detention on Thursday. One of the criteria for their release is signing a bond. Iltija tweeted, “Reports say detainees released today were forced to sign bonds. Under what law is their release conditional as their detention was illegal itself? Many including Ms Mufti have categorically refused to sign these bonds. The govt with its rudderless approach is tying itself in knots.”

Iltija also declared the abrogation of Article 370 and the lockdown in Jammu and Kashmir had cost India it's international image. “A democratic India that always fought for principles of liberty & equality is today being questioned & castigated for its brutal actions in Kashmir internationally. Governments will come & go but what about the damage done to the reputation & moral fabric of this country?” she tweeted from the Twitter handle of Mehbooba.

Earlier in the day, Iltija tweeted from the handle of Mehbooba that the BJP-led government was using the Army to crush dissent.

In two tweets, she alleged soldiers were being used to quell protests and their sacrifices used to obtain votes.

She tweeted, “What explains 9 lakh troops in Kashmir if everything’s normal’? They aren’t there because of an imminent attack from Pak but simply to quell protests. Army’s primary responsibility is to protect borders instead of being used to crush dissent.”

She then went on to allege the BJP was only concerned with winning elections. She tweeted, “BJP uses the jawan card & hijacks their sacrifices to get votes. But truth is that if Kashmiris are treated as cannon fodder, troops have become pawns to contain unrest in the valley. The ruling party doesn’t care about jawans or Kashmiris. Sole concern is winning elections.”