Why Aaditya Thackeray chose to contest from Worli 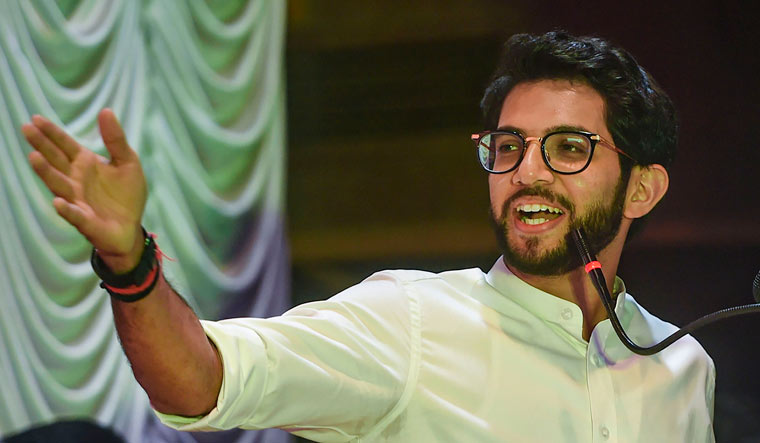 Yuva Sena chief Aaditya Thackeray announces his candidature from Worli seat for the upcoming Maharashtra Assembly elections during a rally, in Mumbai | PTI

The BJP may not have given any promise to Shiv Sena about deputy chief ministership for Aaditya Thackeray, but his decision to take electoral plunge is a result of careful planning within the Thackeray family.

Aaditya Thackeray filed his nomination today from Worli constituency for the upcoming Maharashtra assembly elections, declaring assets over Rs 16 crore, incuding a BMW car. MNS has already taken a decision of sorts not to field any candidate in Worli. Even the Congress-NCP alliance has left the seat for its relatively weak ally Bahujan Republican Socialist Party, thereby giving a clear signal that Aaditya may not face any competition at all.

The choice, of Worli, made by Aaditya is interesting. Contesting an election has been on his mind for almost a year now. Initially, he was thinking about Lok Sabha elections but the Thackeray family collectively felt that he should try his hand at state politics first before graduating to national level. One of the reasons why Aaditya is contesting elections is that he seriously wants Shiv Sena to have its leader as Maharashtra’s chief minister on its own strength. He is planning to work towards it wholeheartedly.

Secondly, by contesting, he is also making sure that in future there would not be any other power centre within the party. When Uddhav Thackeray was taking over the reins from late Balasaheb Thackeray, powerful leaders like Narayan Rane and Raj Thackeray had rebelled as Uddhav was not seen as a strong leader. Rane, having been a chief minister and leader of opposition, had become a power centre in the Shiv Sena legislature party. Aaditya, obviously, does not want any such threat to emerge in the future. Being a legislator and scion of the Thackeray family, it would be much more easier to control the party and help his father in running the party affairs.

He chose Worli constituency for a number of reasons. Worli is, simultaneously, cosmopolitan and yet is ‘Marathi at heart’. It is a constituency where the upwardly mobile live in high-rises while sons of the soil live in chawls, tenements and housing board colonies as their fathers and grandfathers worked in now defunct textile mills in Worli.

“For Sena, Worli is a safe seat. The party has its corporators in almost every ward in Worli. The party organisation has always been very strong in Worli with a well established network of shakhas all around. It is also a seat where there is a sizeable presence of Koli (fishermen) community which has supported Sena from the beginning. Also, by inducting NCP bigwig Sachin Ahir in the Shiv Sena, the leadership has made sure that there will be hardly any opposition to Aaditya from Worli,” said a source in Shiv Sena.

Another interesting point is the fact that Aaditya has always talked about Mumbai having a vibrant and culturally-rich nightlife. Most such happening places are in the erstwhile mills like Phoenix mill compound and Todi mills, which are in Worli. Similarly, Shiv Sena wants to redevelop Mumbai’s race course complex. Much of it is in Worli constituency.

“Aaditya has grand plans for Worli. He wants it to be the best constituency in Mumbai and also the tourist hub of the city. It’s cosmopolitan, and that is why we launched our campaign with a poster in Gujarati ‘Kem Chho Worli’. It has been a Sena bastion—we won it in 2014 when all parties fought separately, and then again in the 2017 municipal elections, we won all six municipal wards despite not having an alliance with the BJP,” said Varun Sardesai, general secretary of Yuva Sena and a close confidant of Aaditya.