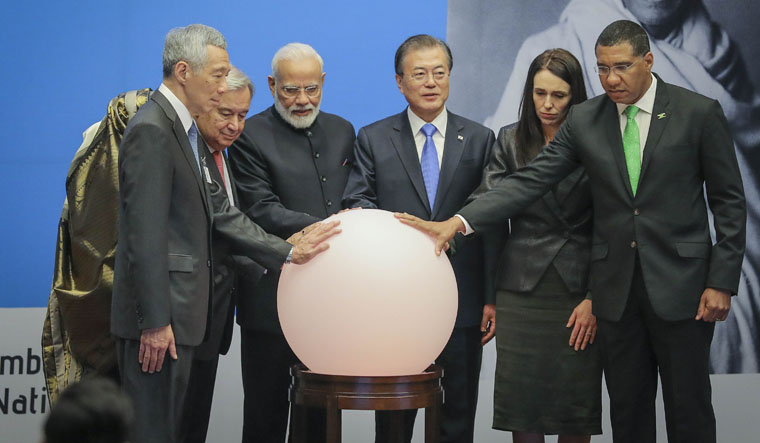 Prime Minister Narendra Modi shared his thoughts on Mahatma Gandhi at a programme hosted by India at the United Nations on Wednesday.

Speaking on "Relevance of Mahatma Gandhi in the Contemporary World", he said the platform was a living example that Gandhi was from India but did not belong only to India.

In a series of tweets in Hindi, the Prime Minister's Office (PMO) said Modi also requested the UN to issue a commemorative stamp on the occasion of Gandhi's 150th birth anniversary.

"Even those who had never met Gandhiji were deeply influenced by his life. Whether it was Martin Luther King Jr or Nelson Mandela, the foundation of their beliefs was Gandhiji, his vision," he said.

The prime minister said today the meaning of democracy had come to be confined to it that people would elect a government of their choice and the government would act as per the expectations of the people.

"But Gandhiji had stressed on the real strength of democracy. He taught people to be self-sufficient and not to depend on governments," he added.

Gandhi had pledged to build a society that was not dependent on the government, the prime minister said, adding, "Everyone knows that he had brought change, but it would also be right to say that he had awakened the inner strength of people so they could bring the change themselves."

Gandhi would have gone ahead with the fundamentals of independence and self-reliance even if the responsibility of the country's freedom struggle was not on him, he asserted.

"In the last five years, we have given primacy to people's participation. Whether it's the Swachh Bharat Mission or Digital India, people are now leading these campaigns themselves," Modi said.

Gandhi never wanted to create influence through his life but his life itself became the reason for inspiration, he said, adding, "Today we are living in an era of 'How to Impress', but Gandhiji's vision was 'How to Inspire'."

"Whether it's climate change or terrorism, corruption or selfishness in public life, Gandhiji's ideals are the guiding light for us when it comes to protecting humanity. I believe that the path shown by Gandhiji will lead to a better world.

"I believe that as long as Gandhiji's philosophy remains embedded in humanity, he will remain relevant and continue to inspire us," the prime minister said.