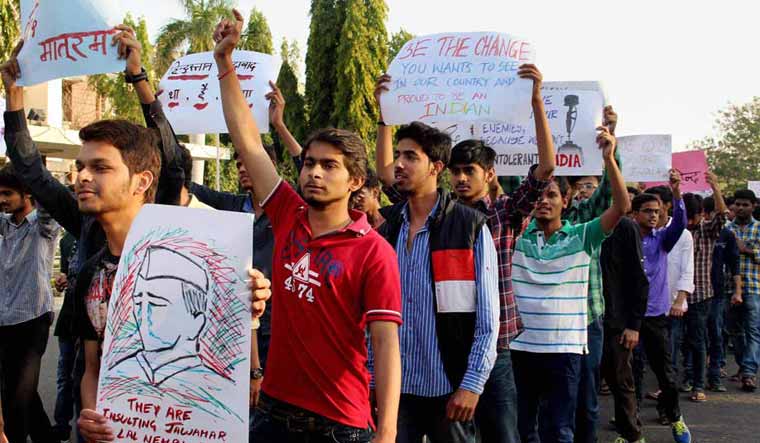 'Critical thinkers' in our universities, media and elsewhere cry hoarse against the sins of the present regime in India, denouncing it as fascist, anti-democratic and what not. But, to use a Hindi proverb, Kabhi inhone apne girebaan mein jhaank ke dekha hai?

The JNU administration's letter asking historian Romila Thapar to submit her CV for review of her status as professor emeritus in the institution has angered the 'liberals' and 'intellectuals' in India, who regard this as a great insult to an eminent academic, and whose grouse is that the space for liberals, academics and intellectuals, and for freedom of speech and expression in the country, has been drastically reduced by the present Indian government. I regret to say I cannot join in this refrain.

In my opinion, most of India's self-proclaimed liberals, intellectuals, academics and mediapersons are an inane, superficial and frivolous, puffed-up and arrogant lot, who have been strutting around like peacocks for long on the Indian stage. They have managed to bedazzle and be-fool most people, particularly the gullible youth into thinking them to be profound paragons, embodiments and the quintessence of wisdom and learning. But the truth is that they have little in their heads and the knowledge they have is only bookish and perfunctory.

To give an example, none of the acclaimed Indian historians ever went deep into the question what is India, as I have in my article What is India in which I have explained that India is really a country of immigrants, like North America, and this explains its tremendous diversity.

None of these historians has explained that communalism started in India from 1857 after the British suppressed the Mutiny (see my 2013 article The Truth about Pakistan). I am a person from a legal background, so this was not really my job, but I had to do it (apart from doing my job as a lawyer and judge), since those who should have done it never cared to make any deep analyses.

Similarly, academics in other fields were mostly satisfied with getting their salaries and perks and never made penetrating analyses of anything.

Today, India is facing a terrible economic crisis, but our professors of economics in JNU, Delhi School of Economics and other Indian universities, colleges and institutes have no clue about its cause and solution. Mediapersons, who are almost all inane and superficial, with half-baked knowledge, are giving puerile explanations about it, posing as experts in the field.

These intellectuals and liberals often cry hoarse about the curtailment of democracy and freedom of speech and expression in India today, but they may be asked: if you have freedom of speech, what will you do with it? What will you speak when you know little yourself? You will mostly spout nonsense.

So how does it matter whether your freedom is curtailed or not? Freedom of speech is not an end in itself; it is only a means to an end, and that end is giving people better lives. But our 'liberals' and 'intellectuals' have made it a fetish.

I am of the view that parliamentary democracy is unsuited to India, since it mostly runs on the basis of casteism and communalism, which are feudal forces, and hence have to be destroyed if India is to progress, but parliamentary democracy further entrenches them. So we have to devise an alternate system of government, and that is possible only by a historic united people's struggle, i.e., a revolution, led by patriotic, modern-minded leaders. But the mere mention of the word 'revolution' sends an electric shock through these liberals and mediapersons who run from it as if it were the plague, though the stark truth is that everything in India has collapsed, the state institutions have become hollow and empty shells (see Why celebrate Republic Day when Constitution has become a scarecrow?), and the economy has tanked and is spiralling downwards.

Before a revolution can take place in India to establish a modern, just political and social order in which all Indians can have decent lives, a powerful ideological struggle is needed to attack and sweep away the centuries of backward, feudal filth—for example, casteism, communalism and superstitions—which has accumulated, and still pervades and persists in Indian society and spread rational and scientific ideas widely. This was the job of our 'critical thinkers'. But where are they? What have they been doing so long?

Intellectuals are the eyes of society, and without them, society is blind. Today, India is in a desperate plight, so there is great need for intellectuals to show light to the people and guide them. But they must be genuine intellectuals. Instead, what we have today unfortunately are a bunch of pseudos who are ruling the roost in India.