Yeddyurappa: Comeback man who will be CM for 4th time in 11 years

The veteran, considered a Lingayat strongman, has been written off more than once 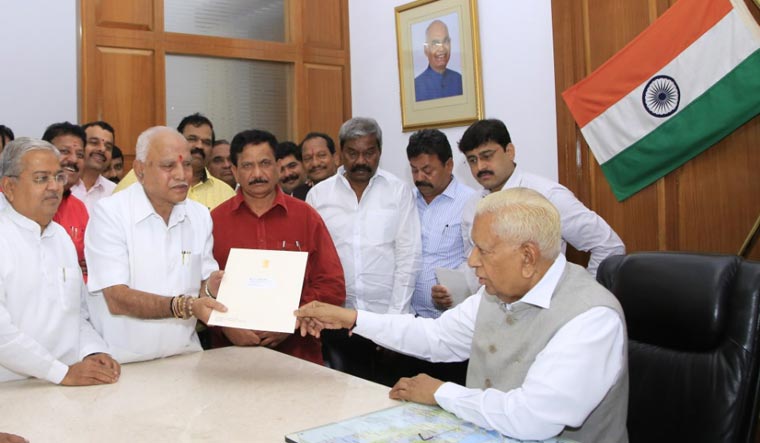 B.S. Yeddyurappa has always elicited mixed reactions as a politician. Detractors allege he is corrupt, but for the BJP faithful, Yeddyurappa will forever be remembered as the man who helped the lotus bloom in the politically barren south for the first time.

The veteran leader, considered a strongman of the Lingayat community, has been written off more than once over allegations of corruption and his age (76 years), but Yeddyurappa has proved to be the ultimate comeback man of the BJP.

Here, we look at the past three times Yeddyurappa was chief minister of Karnataka:

Eight days in first term (2007): The first term of Yeddyurappa as chief minister was in 2007, when the BJP and JD(S) established a coalition government. The two parties came together in January 2006 when the JD(S) pulled out of a coalition with the Congress. The 2004 election threw up a fractured mandate, with no major party—BJP (79 seats), Congress (65) and JD(S) (58 seats)—anywhere close to a majority in the 224-member Karnataka Assembly.

The BJP and JD(S) agreed to a '20:20' format with the two parties holding the chief minister's post for a period of 20 months each. Yeddyurappa was deputy chief minister, while Kumaraswamy was chief minister. The BJP-JD(S) coalition was criticised as being strife-ridden and shaky, not dissimilar to the charges levelled against the 2018-2019 Congress-JD(S) government of Kumaraswamy.

Karnataka was under president's rule for a month after Kumaraswamy resigned in October 2007 as the BJP alleged the JD(S) was reneging on its commitment to the 20:20 formula. The two parties finally agreed to reconcile and Yeddyurappa was sworn in as chief minister on November 12, 2007, becoming the first BJP chief minister in a south Indian state. However, he resigned on November 19 that year after the JD(S) announced it would vote against Yeddyurappa.

Three years in second term (2008-2011): The fractured mandate of 2004 and the perception that Yeddyurappa and the BJP had been betrayed by the JD(S) helped the BJP become the single-largest party in the 2008 Assembly election, called after the collapse of the JD(S)-BJP government the previous year. The BJP won 110 seats in the 224-member Assembly. Yeddyurappa staked claim to form the government with the support of six independent MLAs. Yeddyurappa was sworn in as the chief minister on May 30 2008. The 2008 victory of the BJP was considered even more significant than its performance in 2004 as the party was virtually able to form a government on its own.

In a bid to boost the stability of the Yeddyurappa government, the BJP managed to get four Congress and three JD(S) MLAs to resign and contest byelections on its platform. The BJP won five of byelections, securing a majority in the 224-member Assembly. However, the byelection victories came at a price as Yeddyurappa was soon accused of corruption in various cases. Yeddyurappa was indicted in a mining scam by the Karnataka Lokayukta. The BJP central leadership asked Yeddyurappa to resign and he did so on July 31, 2011. The BJP would go on to have two more chief ministers—D.V. Sadanand Gowda and Jagdish Shettar—till the end of its tenure in 2013. Both served less than a year.

Yeddyurappa was arrested and jailed in connection with a corruption case in October 2011 and released on bail the next month.

The perceived slight to Yeddyurappa saw him turn against the BJP. Yeddyurappa formed a breakaway party, the Karnataka Janata Paksha, in 2012, taking several loyalists from the BJP. The KJP ate into the BJP's vote share in the 2013 Assembly election, and indirectly helped the Congress secure a comfortable majority. Yeddyurappa formally returned to the BJP in 2014.

Three days in third term (2018): The BJP was the single largest party in the 2018 Assembly elections, winning 104 seats, falling short of a simple majority by just nine seats. The Congress (80 seats) and JD(S), with 37 seats, quickly announced an alliance. However, Governor Vajubhai Vala invited Yeddyurappa to take oath as chief minister. Yeddyurappa took oath as chief minister on May 17, 2018, even as the Congress, JD(S) and BJP scrambled to 'protect' their MLAs from poaching.

With the BJP unable to boost its numbers, Yeddyurappa resigned in dramatic fashion as he spoke during a debate on a vote of confidence on May 19.