Yeddyurappa meets governor, to be sworn in as CM for 4th time today

Yeddyurappa will be sworn in as CM between 6pm and 6.15pm 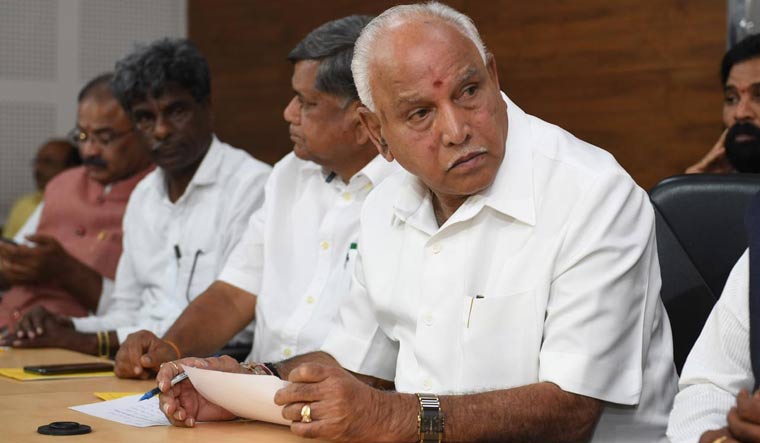 Three days after the H.D. Kumaraswamy government lost a vote of confidence in the Karnataka Assembly, the BJP will form a government in Karnataka on Friday. The BJP had run a short-lived government, lasting little over two days, after it was invited to form the government following the fractured mandate in the Assembly elections of May 2018.

On Friday morning, BJP state chief and three-time chief minister B.S. Yeddyurappa met Governor Vajubhai Vala to formally stake claim to form a government. The Kumaraswamy government, comprising the Congress and JD(S,) fell on Tuesday after it could get just 99 votes in support; The BJP had 105 votes in its favour.

Yeddyurappa told reporters on Friday that he intended to take oath of office for the fourth time as chief minister between 6pm and 6.15pm on Friday. Yeddyurappa said the governor had consented to his request for being sworn in. Yeddyurappa also invited all legislators of Karnataka, including Kumaraswamy and CLP leader Siddaramaiah, to his swearing-in.

Karnataka has been in political crisis since July 1 after 16 MLAs of the Congress and JD(S) resigned from the Assembly on separate dates, while two independent MLAs switched support to the BJP. This pushed the Congress-JD(S) dispensation's numbers down from 119 MLAs to 101. The Karnataka Assembly has 224 elected members.

On Thursday, Karnataka Assembly Speaker K.R. Ramesh Kumar disqualified independent MLA R. Shankar, Congress MLAs Ramesh Jarkiholi and Mahesh Kumtahalli until the end of the current Assembly's tenure. The speaker added he would decide on the disqualification and resignation letters of the remaining rebel MLAs.

The nature of the action against the rebel MLAs is crucial to deciding the prospects of a BJP government. If the resignations of the MLAs are accepted, they can contest bypolls on a BJP ticket. However, if the MLAs are disqualified, they would not be able to take up government posts till their disqualification period ends or is overturned.