Karnataka: BJP urges governor to 'save democracy' as crisis drags on 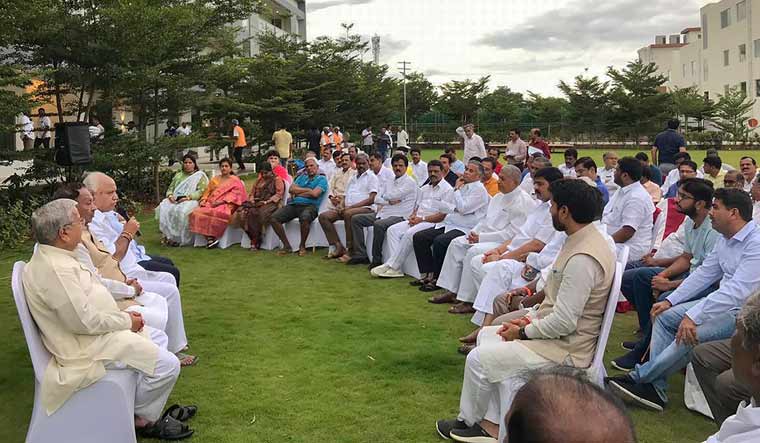 Karnataka BJP president B.S. Yeddyurappa holds a meeting with the party MLAs at a resort in Bengaluru | PTI

Alleging that democracy was being murdered in Karnataka, BJP general secretary Muralidhar Rao on Monday urged the governor of that state to protect the principles of democracy.

The BJP will not accept this. We urge the (Karnataka) governor to protect (democracy)," Rao told reporters in Hyderabad.

He claimed that the Karnataka Assembly speaker was violating the law and subverting the spirit of the Constitution by conducting the debate on the trust vote in a "never-ending" manner.

The debate was continuing despite the governor's appeals to conclude the debate on the vote of confidence, Rao, in-charge of BJP affairs in Karnataka, alleged.

Rao alleged that the act of Karnataka minister D.K. Shiva Kumar of Congress in going to meet the rebel MLAs in Mumbai amounted to undue influence, horse trading and negotiation.

Rao alleged that Chief Minister H.D. Kumaraswamy was taking unethical and illegal decisions though he did not have a majority

"We will never accept these decisions of this government which are against the people," he said.

The BJP would showcase the Karnataka developments as an example for the "unethical politics" of Congress-JD(S) in the coming days, he said.

The Congress-JD(S) government in Karnataka has been rocked by rebellion by a section of its MLAs, threatening its survival.

For the third day running, the state assembly is debating the confidence motion moved by the chief minister.

The debate on the confidence motion prolonged to Friday, with the ruling coalition defying the two deadlines set by Governor Vajubhai Vala to complete the process by 1.30 pm on Friday and later by the end of the day.

The proceedings were adjourned till Monday after the speaker extracted a commitment from the government that the process would be completed by Monday itself.

As many as 16 MLAs—13 from the Congress and three from JD(S)—had resigned, while independent MLAs R. Shankar and H. Nagesh withdrew their support to the coalition government, pushing the government to the precipice.

One Congress member Ramalinga Reddy retracted from his decision to resign, saying he would support the government.

With the support of the two independents, the opposition BJP has 107 MLAs in the 225-member House, including the nominated MLA and speaker.

If the resignations of 15 MLAs (12 from the Congress and three from the JD(S)) are accepted or if they stay away, the ruling coalition's tally will plummet to 101, reducing the government to a minority.